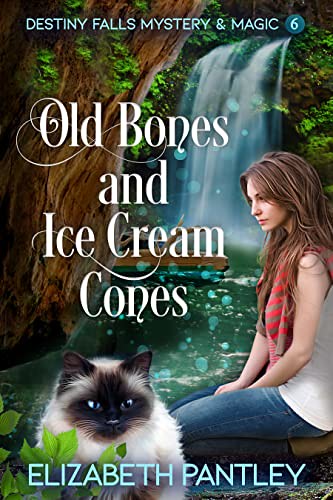 Blurb:
A boyfriend who’s missing. Or was. . . Or is. . . A boat full of old bones. A community ice cream social. A friend in trouble, a spiteful witch, and an angry villain. The mysteries and fun abound in Destiny Falls. Hayden, Latifa, and their family and friends are up for the excitement and adventure.

Old Bones and Ice Cream Cones follows the series format of combining two stories that blend into one. A murder mystery and the island mystery.

The Island Mystery: Hayden’s boyfriend Han is missing. But she swears she saw him zoom by in his car. She’d thought it was a surprise, and that he was home early from his secret service case. She was wrong. The surprise is that his signal isn’t pinging, and no one knows where he is. There appears to be black magic behind his disappearance. Can they learn who’s responsible and bring Han safely home?

The Murder Mystery: A pile of old bones is found in an ancient fishing boat. They could be tied to the disappearance of two young women years ago, back when many of the Destiny Falls people where in high school. Many of the citizens had bad history with the students. Do the bones belong to them, and what happened? Were they murdered? And could the murderer be living among them?

Hayden and Latifa’s many adventures in Destiny Falls will keep you guessing with each book in this fun and intriguing series.

Old Bones and Ice Cream Cones is the sixth book in the Destiny Falls series and I always enjoy returning to this series. It’s such a fun and magical series and I enjoyed this read. Unfortunately I didn’t enjoy this book as much as some of the others.

In Old Bones and Ice Cream Cones there are two main plot lines. First there are the old bones Hayden discovers and they have to figure out who they belong to and what happened. Then there is Hayden’s boyfriend Han who disappeared and there seems to be black magic involved. And there is another festival in the plans, this time a 50s themed ice cream social.

So there’s plenty going on, but for some reason the book felt kinda slow at times. Most of the plot lines come to the conclusion late in the book and I felt like especially some chapters in the middle were a lot of waiting, although there were things going on the plot liens progressed, but it still felt like Hayden just had to wait for things to come together. I didn’t like how we basically know the outcome and how Hayden just has to wait for things to come together as it didn’t feel as active as tense this way. Hayden is also pretty stressed with everything going on and I felt it made the book less enjoyable and not as relaxing as some of the previous books.

The old bones murder mystery didn’t fully work for me. I missed the tie to the present and how this was relevant now. I also felt Hayden wasn’t as involved in figuring things out and she mostly had to wait for the sheriff to figure things out, luckily she is kept in the loop and can contribute some things. I was a bit annoyed when she jumped to conclusions about who had done it. She just seemed a bit too convinced while usually she’s more nuanced about it.

I liked seeing everything come together at the end, I was pleasantly surprised by the murder mystery reveal as it all fell on it’s place. It also was nice to see the ice cream social take place, although I felt the festival in book 5 was more fun. The wrap up of the dark magic mystery surrounding Han felt a bit rushed to me. After al the build up it just felt almost too easy how it all played out, but it was nice seeing all the plans play out

My favorite part of this book was spending some time again int his magical world and reading about all the characters I’ve grown to know over the course of the series. I think the author does a great job handling so many different characters and giving all of them screen time and their own personality. I also liked seeing Han and Hayden together and seeing how deep their feelings have become. The magical feel of the island is great too.

To summarize: This was another solid read in this series, although for me this one was a bit less good than some of the other books. There’s plenty going on with a mystery surrounding some old bones, Hayden’s boyfriend who disappeared with black magic involved and an upcoming ice cream festival. The old bones mystery didn’t grip me as much as I missed the tie to the present and there was a lot of waiting involved for Hayden. I liked how she could help at times, but didn’t like how she jumped to conclusions. I liked how the mystery got resolved and wrapped up. The mystery surrounding Hayden’s boyfriend progressed steadily, but there was a lot of waiting for things to get in their place and it felt a bit slow. I thought the wrap up for it was a bit rushed after all the build up, but I liked seeing how everything played out. It was fun to return to this magical world and spend time with all the familiar characters. I look forward to the next book.

One response to “Review: Old Bones and Ice Cream Cones by Elizabeth Pantley”