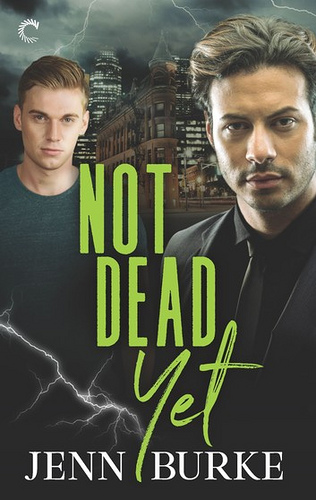 Blurb:
Dying isn’t what it used to be.

Wes Cooper was dead. Then he wasn’t—though he’s not exactly alive, either. As an immortal not-ghost, he can transition between this world and the otherplane, which makes him the perfect thief for hire. For seventy years he’s made a “living” returning items to their rightful owners, seeing his fair share of the bizarre in the process. But he’s never witnessed murder. Until now.

His latest mission brings him more than he bargained for: a very-dead actor who is definitely going to stay that way. It’s just Wes’s luck that his ex-boyfriend, Detective Hudson Rojas, is assigned to the case. Hudson broke Wes’s heart years ago—and could again, given he’s rocking a hot silver-fox look that shouldn’t be legal.

As they work together to track down the murderer before anyone else gets hurt, it becomes clear Wes and Hudson have unfinished business. And when a secret Hudson’s been keeping threatens more than just their happiness, it might mean the end of their not-life together—permanently.

This book is approximately 91,000 words

The concept of this book grabbed my attention and then once I read Chaos Station that is co-written by Jenn Burke and Kelly Jensen I was convinced I had to try some of Jenn Burke’s solo work as well and I decided to request this one. And I am glad I did as it was a great read.

Not Dead Yet is told from the point of view of Wes, who is a ghost, sort of. He got resurrected when he died years ago, but he isn’t just a ghost, he is more like an immortal who can travel to the plane were ghosts reside, the otherplane. When he witnesses a murder while in the otherplane he contacts his ex lover Detective Rojas. They team up and together try to figure out who is behind the murder.

This book is a great combination of genres. It has a solid suspense/ mystery plot line, strong paranormal ties everywhere and a great romance that develops throughout the book. I would label this as paranormal romantic suspense, but it really has elements of all those genres and more and the author blends it all together in an exciting tale.

It took me a while to figure out how Wes his ability/ state worked. At first I thought he was just a ghost, but I would think of him more as an immortal with special ghost-like abilities. And as for his personality, let’s say it is tough to fully like Wes at first, even tough he certainly has likable parts, he also is very selfish. I think this is done on purpose as there is some great character development going on in this book. And I did think how he acted made sense for his character and also how and why he changes.

The mystery was intriguing. While is wasn’t really possible to solve this one before the big reveal, it was fun to follow the characters along while they tried to solve this. And it definitely kept me guessing and wondering what was going on. There are some great twists along the way and while the final take down scene had some more cliché parts, it had some unique elements as well and I am curious how what happened will affect them in book 2.

There is a interesting cast of side characters too. Hudson was the love interest and then there are Lexi and Evan were great side characters. They slowly form a group and at the end I really liked the tight knit group they formed and how they had each other’s back and worked together to solve this.

I wasn’t quite sure what to think of the romance at first. Let’s say the reason they broke up is one of those things I don’t like and I don’t think Wes should’ve done/ asked that. On the other hand it also made sense how they broke things up back then and I felt like they made for a better couple now, while they both matured a bit more. It was fun to see them reconnect, I liked the second half the best, after Hudsons’s hot and cold behavior got explained. The hot and cold behavior of Hudson at first really annoyed me, but it does sort of make sense later on. And by the end I thought these two really make for a great couple and I was happy to see them have this second chance.

To summarize: all in all this was a great read. It had a great mystery/ suspense plot line, some great twists, a well done second chance romance, great main character and side characters, a good amount of character development and a strong paranormal element. And it’s all blended together in an exciting read. I didn’t warm up to the romance at first with Hudson’s hot and cold behavior and with what Wes asked of Hudson before they broke up last time, but it makes more sense later in the book and I think they are at a better place for a relationship now than they were back then. By the end I really liked them together. Lexi and Evan made for some great side characters and I liked how they formed this tight knit group who had each other’s back. Wes is a bit unlikable at first, but I still enjoyed reading about him and he has some great character development throughout the book. The paranormal aspect was interesting too with some more common and more unique parts mixed together. I liked learning more about the paranormal world while solving the mystery alongside the characters. All in all this was a great solid start to this series and with the way things end I am really curious about book 2.

Tell me about a book you read that had a unique combination of genres?

4 responses to “Review: Not Dead Yet by Jenn Burke”