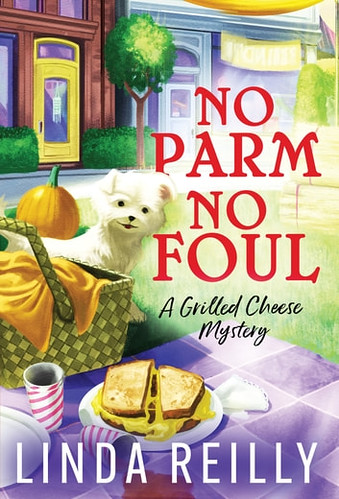 No Parm No Foul (Grilled Cheese Mysteries #2)
by Linda Reilly

After a long hot summer in Balsam Dell, Carly Hale is ready for crisp Vermont weather and gourmet grilled cheeses at her Grilled Cheese Eatery. And the upcoming Halloween food competition is the perfect way to impress the locals.

But Ferris Menard, the owner of Sub-a-Dub-Sub, is nursing a serious grudge against Carly. Two days before the competition, one of Carly’s employees quit his part-time gig at Menard’s sub shop, sending Menard into a serious snit. In a confrontation at the Eatery, Menard accused Carly of sabotage and vowed to bring her down.

That’s when Menard’s body is found in his kitchen the morning after the competition, a steak knife sticking out of his heart. But Menard had a slew of enemies, and if Carly doesn’t figure out which one is the culprit, she might find herself—or someone she cares about—serving grilled cheese sandwiches under lock and brie!

No Parm No Foul is the second book in the Grilled Cheese Mysteries and I was happy to return to this series for book 2. The grilled cheese theme is a fun one. I liked the mystery in this one and following Carly as she solved another murder.

In this book Carly gets involved in the mystery as her boyfriend Ari is a suspect. She knows he didn’t do it and gets involved in figuring out who is the murderer. I thought it was a well done mystery with plenty of suspects and some nice reveals along the way. Not everyone is guilty of murder and some other secrets came to light as well. It kept me guessing and I was thinking along the wrong direction, there was a nice twist when it came to whom the murderer it. I liked seeing everything get resolved at the end.

I enjoyed the mystery as well as Carly’s job running her grilled cheese restaurant. I liked her interactions with her employee Grant as well and seeing them develop some new grilled cheese sandwiches as well. I didn’t always like how Carly acted at times, she can be kinda rude or confrontational at times and she’s not very subtle in her asking of questions. I didn’t like how she kept some things form her boyfriend and how she acted when he confronted her about it. I am not really feeling the romance and was actually wondering whether they would break up. Something about it is just not working for me.

To summarize: This was a good second book in this series. I liked following Carly as she solves another mystery and the grilled cheese theme is a fun one. The mystery was a good one with plenty of suspects that kept me guessing and I was thinking in totally the wrong direction for who the murderer was. The reveal made sense and I liked seeing things get resolved at the end. There are some other things that come to light during the book as well, which I liked. I like reading about the grilled cheese restaurant as well as how Carly interacts with her employees. I am not a fan of Carly’s behavior at times and how she handles some things. I am not really feeling the romance and I didn’t like how Carly kept some things from her boyfriend and how they handled some things. I had fun reading this book and look forward to the next one.

2 responses to “Review: No Parm No Foul by Linda Reilly”