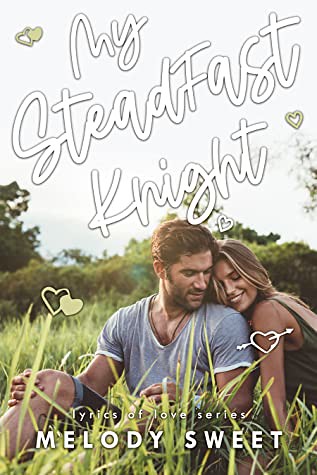 My Steadfast Knight (Lyrics of Love #9)
by Melody Sweet

Blurb:
She’s out of her depth trying to raise her orphaned nephew. He’s a child counsellor who just wants to help. Can three strangers from completely different worlds create an unlikely family?

Cassie:
I can’t do this. I’m twenty-two! I can’t raise a twelve-year-old boy!
I didn’t even know Felix existed until a few days ago. I hadn’t seen my sister in years, and then she calls me out of the blue telling me she’s dying and begging me to take her son.

I couldn’t refuse. I couldn’t knowingly send a child into a foster system that nearly destroyed me. I have to help him, but I don’t know how.
He’s lost his mother. His everything.
And now he’s stuck living with a woman who doesn’t like to be touched.
I can’t even say, “I love you.”
How are we going to survive this?

Troy:
Cassie’s stronger than she thinks she is.
I can see the fear in her eyes, the sad desperation in her nephew’s.
They don’t know how to make this work.
That’s why I’m here.

I’m going to help them. I’ll guide them through just like I do all my other cases.
Except this time it’s different.
I’m feeling things I never have before. A stir of affection for this woman desperately trying to do the right thing, and a boy with sad brown eyes and a heart of gold.

Something about this hopeless duo have captured my heart, and now I’m starting to wonder if the family I never thought I wanted could actually be found with two of the most unlikely people.

My Steadfast Knight is a standalone novel in the Lyrics of Love sweet contemporary romance series. If you like stories that will have your heart breaking one moment and blooming the next, then you’ll adore Melody Sweet’s profound romance novel.

PLEASE NOTE:
This book was previously published as Hole-Hearted by Melissa Pearl. It has been rewritten and re-edited to this sweet romance edition. Enjoy!

My Steadfast Knight is the 9th book in the Lyrics of Love series. This was another difficult to read book, but also such a beautiful story about a women who has gone through so much and struggles to deal, but eventually finds her way. This story has some big emotional ups and downs and it really is an emotional read at times. While it has some sad and difficult moments it also has plenty of happy and uplifting parts.

I like how this book was told from 3 different point of views. Not only do we have Cassie and Troy’s point of view, but also Felix. At the start of the book Cassie gets contacted by her sister, they haven’t seen each other in years, and now she’s dying. Cassie’s sister asks Cassie to take care of her son Felix. And so Felix ends up living with Cassie. Cassie is still dealing with a trauma that happened when she was a kid and while she functions, she’s not fully living her life. She has her control and schedules and everything is clean and now she has to take care of a kid and she doesn’t know how.

While this book has a romance, it first and foremost felt like Cassie’s journey to find her way. The first part of the book is a lot of struggling, but the worst of it only gets out later in the story. It’s so hard to hear about what Cassie went through and seeing her struggle. And at the same time this was such a beautiful story of 3 people who become a family. As much as Cassie was there for the kid Felix, Felix also helps her. And then there’s Troy who falls in love with Cassie and cares about Felixand he’s there for both of them and they formed this awesome family together.

Due to the heavy matter and all the struggles of Cassie taking care of Felix, it did feel like the romance was a bit of on the back burner at times. It’s definitely not a typical romance story, but the way the story was told worked great for this book. Most of the scenes involved all 3 characters, but there were some great scenes with Cassie and Troy only. And some bonding scenes between Cassie and Felix that were awesome too. I really liked how patient Troy was and how he was there for Cassie and loved her without expectations. The epilogue was awesome too and I really liked seeing them have their happy ending.

To summarize: This was another great read in this series. It deals with some tough subject matter with what Cassie went through as a kid. And it is a difficult book to read at times with some really sad parts, but there also is plenty of happiness and uplifting moments. I really liked seeing Cassie come out of her shell and see her change throughout the story. It also was great how this book not only had her point of views and that of the love interest Troy, but also of the kid she takes in Felix. These 3 from a tight family by the end of the book and it was great to see. The romance does take a back seat at times, but I still liked seeing Troy and Cassie grow closer. Troy is so patient and kind with Cassie. Another great read and it was awesome seeing them get their happy ending in the epilogue.

2 responses to “Review: My Steadfast Knight by Melody Sweet”