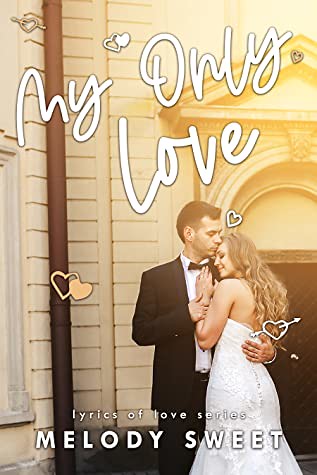 My Only Love (Lyrics of Love #7)
by Melody Sweet

Blurb:
He’s lost in a sea of guilt and despair. She thinks their marriage is on the brink of ruin. Can two wounded souls find the strength to mend what’s been broken?

Justin:
I love my wife. Deeply, madly, passionately.
But how do I show her? How do I get over my brother’s accident?
I should have been there for him. It’s my fault he’s dead.
I don’t know how to be happily married when my brother is buried six feet under.

Sarah wants me to talk about it, but I don’t have the words.
And now she’s done the unthinkable. Crossed a line I can’t get over.
I’ll love her for the rest of my life, but maybe wedded bliss is just a fairy tale.
Maybe my only choice is to set her free.

Sarah:
I didn’t mean to hurt him. I wish I could take it back.
But I can’t.
I can’t undo what’s been done.
The only power I have is to make this right.

Justin promised he’d never let me go.
I’m not going to let him.
I love my husband. We have to make this marriage work somehow.
He’s my only love.
And I can’t stop fighting for what we once had. If only he’d let me.

My Only Love is a standalone novel in the Lyrics of Love sweet contemporary romance series. If you like stories that will break your heart and stitch it back together again, then you’ll love Melody Sweet’s inspiring romance.

PLEASE NOTE:
This book was previously published as Rough Water by Melissa Pearl. It has been rewritten and re-edited to this sweet romance edition. Enjoy!

My Only Love is the story of Justin and his wife Sarah. We already met Justin shortly in My Future Husband and My Country Angel a bit, where we see he is struggling and has troubles in his marriage. I was curious to find out what was going on. This was a great read, but also a tough and sad read for most of it.

From the start it was clear how much Justin and Sarah love each other. The book starts on their wedding day and these two are so happy. In fact the beginning is so happy that I just knew it wouldn’t last and that’s exactly what happens. Justin’s brother dies in a way that leaves Justin feeling guilty. Both he and Sarah were close to Justin’s brother Blaze and his fiancé Jane, so his death impacts both of them strongly. Instead of dealing with their grief they lose themselves in their work. They don’t communicate and drift farther apart until an event later in the book where things escalate even more. They hurt so much and are dealing with so much in this book, it was tough to read at times. And they also hurt one another a lot before they figure out how to fix things.

This is not a happy story for most of the book, it’s sad and painful to read at times. The solution to their problems is so obvious when reading it and at times I just wanted to lock them in the same room and get them to talk and open up. It just made me feel so sad for these characters seeing them struggle, while the other person was there for them if they would just reach out, but for most of the read they both shut down and don’t communicate well. And then the few times they try to reach out and it doesn’t work was even sadder. While the solution might be obvious when reading I also thought the story felt realistic and relatable. As often in those type of situations it’s difficult to see how to proceed or how to fix it and these characters were to deep in their well of misery that they just couldn’t see a way out. While the book is pretty sad it almost makes their happy ending feel even sweeter and I was so happy to finally see these two work things out.

I loved the fact that this was about a couple who already were a couple and then had to work through their problems. You so rarely see this set-up in romance books and I actually thought it was very interesting to read. A relationship is hard work and doesn’t stop being effort when you get together, so I enjoyed seeing a book tackle that.

I mostly liked Justin and Sarah, but at times it was hard to feel that way as they both make mistakes and some really big ones too. While Sarah might make the worst one, Justin certainly isn’t without blame either. They both hurt the other and fail to open up and connect. They both didn’t try enough to fix their marriage and even later on when they’re trying a bit, I just wish they would fight a bit more and actually talk things through. When they finally do really talk things through and really are there for one another again it’s awesome.

While I enjoyed this book it really was one of those tough to read books and sad reads that you have to be in the mood for. It was hard to see these characters struggle and after all they had been through it was awesome to see how how they deal with everything at the ending. I did seem a bit too easy almost when they finally fix things, on the other hand that too felt realistic as they just had to open back up to the other. And reaching out and connecting again was the hard part for these characters. I also would’ve liked to see a bit more resolution for how Justin would deal with his grief or find a way to really forgive himself. And also how he forgives Sarah for what she did and how he deals with his feelings about that. For as much as both those things were part of their struggle I also would’ve liked to see a bit more about how that would get resolved.

For how sad this book could be at times at the end it’s a hopeful story as well. It shows how love can overcome everything and how a couple that lost their way and struggles a lot can find one another again and eventually find out what they really want of life. I did love the epilogue and the resolution to their job struggles as it was the perfect solution.

To summarize: This is a sad and tough book to read at times, but in the end it has a hopefully ending and is about a couple who loves each other a lot. It was wonderful seeing this couple find their way together again after a lot of heartache and struggles they have to go through first. I liked how this story follows a couple that is already together and their struggles with their relationship after they are together. I also liked how it felt realistic and relatable in a way with the struggles this couple goes through to make things work and how it shows you have to work on a relationship. There were a few things I would’ve liked to see dealt with more in the resolution as it was such a big part of their struggle. The ending and epilogue were awesome and it was just so sweet to see these tow become happy again. All in all another great read in this series and I am excited for the next book.

2 responses to “Review: My Only Love by Melody Sweet”