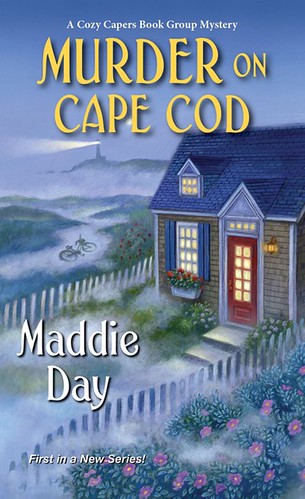 Blurb:
A Cape Cod shop owner and her book club must find a crafty killer in this charming new series fromthe Agatha-nominated author of the Country Store Mystery series.

Summer is busy season for Mackenzie “Mac” Almeida’s bicycle shop, nestled in the quaint, seaside hamlet of Westham, Massachusetts. She’s expecting an influx of tourists at Mac’s Bikes; instead she discovers the body of Jake Lacey. Mac can’t imagine anyone stabbing the down-on-his-luck handyman. However, the authorities seem to think Mac is a strong suspect after she was spotted arguing with Jake just hours before his death. Mac knows she didn’t do it, but she does recognize the weapon—her brother Derrick’s fishing knife.

Mac’s only experience with murder investigations is limited to the cozy mysteries she reads with her local book group, the Cozy Capers. So to clear her name—and maybe her brother’s too—Mac will have to summon help from her Cozy Capers co-investigators and a library’s worth of detectives’ tips and tricks. For a small town, Westham is teeming with possible killers, and this is one mystery where Mac is hoping for anything but a surprise ending…

I really enjoy this author’s Country Store Mysterie series, so when the author launched this new series I was excited to start this one as well. I enjoyed getting immersed into this new series. It’s set on Cape Cod and I liked getting a feel for the place as well as the characters.

The book follows Mac. When she returns home one night from her cozy mystery book group meeting she stumbles (literally) over a dead body. She and her friends have eyes and ears all over town and have seen some strange things before the murder and keep their eyes out after it. They form a group of amateur sleuths determined to solve the mystery. I liked how while the focus was on Mac, she had a whole group of characters around her who helped with the sleuthing as well. As this was the first book in the series there is some time spend getting to know the characters and setting, which I enjoyed.

The mystery was a decent one. The mystery had a lot of questions about who did it and why, that only got resolved toward the end. The mystery wasn’t as engaging as I had hoped, but I think that’s mostly because it’s the first book in the series. I did like how it kept me guessing for most of the book, but the reveal didn’t surprise me. I did feel that the progress of clues was quite slow, only toward the end the motive and killer and most of the other questions related to the mystery get answered, so the earlier part of the book feels a bit slower because of that. Nevertheless it was an interesting mystery and there are some interesting developments.

I liked Mac as main character and how we get to see a bit of her daily life as well as her work at the bike shop she owns. I thought it was fun she owned a bike shop as that isn’t something I read about before. I also liked she had a pet bird, a parrot. There are some fun scenes with her parrot. It also was a nice touch that there isn’t any developing romance as Mac is already in a relationship, although in such cases I am always wondering if that stays that way. So far they seem like a solid couple.

I liked the big group of side characters and as the book progresses we get a bit of a feel for each of them. This book is a lot about establishing the characters and I look forward to seeing more of them in book 2. I didn’t really care for the meta like theme of this being a cozy mystery about a cozy mystery book group. While it has some nice references that cozy mysteries readers will get it always feels a bit off to me with the character referring situations and books similar to the one they’re part of. I liked the setting of cape cod and how the author made this town feel alive.

To summarize: I enjoyed this book. It was a good start to this new series, at times it does feel a bit like a first book with how it has to introduce all the characters as well as the setting. There is a big group of side characters and it was nice getting a feel for everyone. I liked main character Mac and how she had an unique job as a bike shop owner and has a pet parrot. The mystery was a decent one, with plenty of questions, but most of those stayed open till the end. It kept me wondering, but I wasn’t surprised at the reveal of who the murderer was. I didn’t really care for the meta theme of them liking cozy mystery books, but I did like how Mac has a whole group of characters who help her sleuth. I liked my stay in cape cod and spending time with these characters. All in all this was a solid start to this series and I look forward to the next book in the series.

2 responses to “Review: Murder on Cape Cod by Maddie Day”