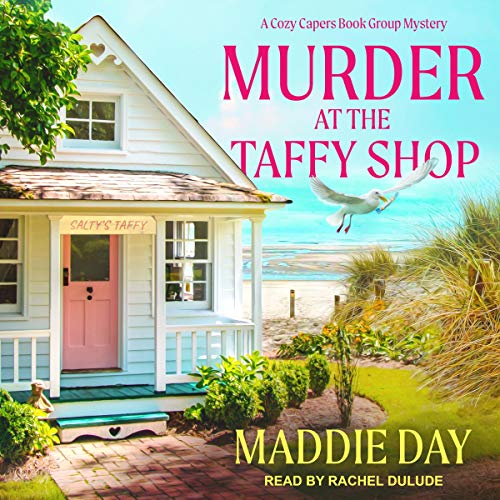 Blurb:
When murder turns out to be the special of the day at her friend’s seafood restaurant, bicycle shop owner Mackenzie “Mac” Almeida and her fellow book club sleuths have to net a killer…

From clam chowdahs to oysters on the half-shell, Tulia Peters’ Lobstah Shack offers locals and tourists in Westham, Massachusetts, some of Cape Cod’s most amazing cuisine. But when the body of Annette DiCicero is discovered in the kitchen’s walk-in freezer—with a custom-made claw-handled lobster pick lodged in her neck—spoiled appetites are the least of Tulia’s worries.

After a heated public argument with Annette, Tulia is a person of interest in the police’s homicide investigation. To clear Tulia’s name, Mac and the Cozy Capers Book Group snoop into Annette’s personal life. Between her temperamental husband, his shady business partner, and two women tied to Annette’s past life as “Miss New Bedford”, there are now several suspects and multiple motives. And they’re getting crabby about Mac intruding on their affairs..

I received a free copy of this book from Tantor Audio and voluntarily reviewed it.

Murder at the Lobstah Shack is the third book in the Cozy Capers Book Group Mystery series. This series follows Mac and her friends in the cozy capers book group as they solve mysteries. This time one of Mac’s friends discovers a body in her walk in fridge and the group gets together to solve another mystery.

I really like this author’s Country Story Mystery series, but for some reason this series never gets quite to that level for me, which makes me sad. The whole concept of them having a cozy mystery book group in a cozy mystery book just feels a bit off to me. And while I like reading about Mac’s bike shop, it doesn’t have the same charm to me as Robbie’s store.

The mystery in this one didn’t quite work for me. I am not quite sure why, but even from the start this mystery didn’t quite grip me. There are some possible suspects and plenty of red herrings. There’s a lot that comes to light and leads to the reveal at the end, but it just wasn’t as interesting to me. There was a key piece of evidence someone held behind and it just felt that with that piece revealed earlier this mystery would’ve been solved much earlier. I also thought the reveal was a bit anti-climactic and it felt kinda sad to me.

I like reading about Mac and how she’s smart enough to take precautions when she’s investigating. yes she gets herself in danger sometimes, but she acts smartly and uses her brain before rushing into a situation. I like her interactions with her friends and family. It was great seeing how her and Tim’s relationship developed in this book, although for some reason I keep wondering whether they stay together or not, especially after what happened in book 2. I also like Mac’s parrot who is fun to read about.

I am glad I listened to this one. Rachel Dulude does a great job with the narration and I like how she does the different character voices. I can definitely recommend the audio version for this series.

To summarize: While this was an entertaining read it didn’t grip me as much as I had hoped. The mystery didn’t quite work for me and I wasn’t as interested in finding out how did it. There are lots of things that come to light, but it just wasn’t as interesting to me for some reason. Someone keeps a key piece of evidence behind that could’ve solved the case a lot earlier and the reveal felt kinda anti-climactic and sad to me. I like how Mac is pretty smart in her investigations and doesn’t get herself into danger too much. Rachel Dulude does a great job with the narration for this one and I like the way she does the different voices for the characters.

2 responses to “Review: Murder at the Lobstah Shack by Maddie Day”