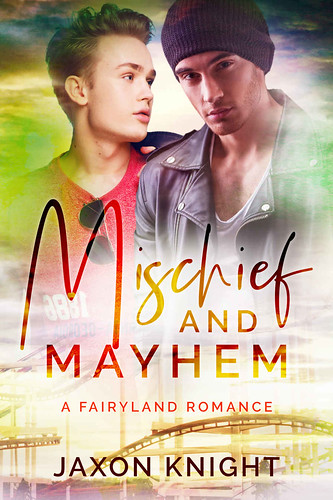 Mischief
Protecting royalty at Fairyland theme park seemed about as far from Afghanistan as Cody could get. But the hot new rollercoaster brings up some unexpected trouble – and not the kind of trouble he knows how to handle alone.

Mayhem
Dean loves running the Spaceship Mayhem roller coaster – he gets to meet new people every day! When he sees a handsome, troubled security guard repeatedly fail to ride it, he sees an opportunity to help. And maybe they can be more than friends?

Cody reluctantly accepts cute, boy-next-door Dean’s help and sparks fly between them, but between mischief, mayhem and miscommunication, can they ever make a relationship work?

After reading the first book in this series I immediately bought book 2 and I started this one not long after book 1 as I wanted to return to this fun sweet romance series. Mischief and Mayhem follows a new couple, this time Cody, whom we met in book 1 already as a side character, and Dean, a new character.

I liked Cody in book 1 already and I liked seeing him get the spotlight and his chance for happiness in this book. He’s been through a lot in the war and now he’s doing some security at the park. He likes his job and has a decent life, but he still struggles with some nightmares, fears and PTSD and doesn’t realize how lonely his life is at times until Dean worms his way into his life.

Dean was also easy to like with his affectionate way and how friendly and cheerful he was all the time. He really wore his heart on his sleeve. Although I did found the first time he talked to Cody a bit weird after he looked him up and then interrupted his work. At first I sometimes struggles a bit with him and the romance, but the further I got in the book the better it got. Dean was like an excited puppy at times, making everyone happy and he loved interacting with people. There’s this awesome scene late in the book where he makes two new friends in a matter of minutes as that’s just the type of person he is. It was quite adorable how he acted and I liked how he interacted with Cody.

So at first I didn’t really feel the romance. There was the big age difference, which is a trope that not always works for me. Then there was the way Cody was this hardened and troubled veteran, while Dean was this cheerful young guy. But once the book progressed and I got to know both characters better I came to like that difference in personalities. How Dean was good for Cody and also how Cody was there for Dean. And how that difference in personality actually worked really well. The closer they grew together the less the age thing seemed to matter too. By the end I was fully invested in seeing them together. I only wish we got to see a bit more of what comes next, but maybe in future books we catch some glimpses of that.

Their romance is a bit of a friends to lovers romance. They become friends first and then slowly begin to feel more. There is a bit of a misunderstanding, which prevents things from going further and then another trouble they run into later on. I thought it all developed in a realistic and interesting way.

This book has a bit of a different tone than book 1, but also is similar enough if that makes sense. Cody’s PTSD makes the tone a bit different from book 1 and with this romance developing differently. But it also had a lot of similarities to book 1 like the theme park and how fun it was. I also like how these romances develop, without too much of the typical tropes and the hurdles the couples have to overcome feeling realistic for the characters.

I liked being back in this theme park. With Dean working in the space themed part of the park we see a whole different side of the park. And at the same time we still see a lot of the Enchanted Forest part too as Cody works there. It was a nice way to combine the more familiar part with a different part of the park.

To summarize: This was another fun read in this series. The tone is slightly different and a tad darker with Cody struggling with PTSD, but it was handled well and didn’t overtake the plot, while still being an important part as well. It was nice to see Cody, whom we met in book 1 already get his story now. Dean was a new character and I liked his cheerful happy manner, with how he genuinely wanted to help people and make their day better. Where Cody is more serious and a bit hardened due to what he has gone through. It’s interesting to see these two characters who are so different fall for each other. I struggled a bit with the romance at first, not fully seeing how their different personalities would work together and the big age difference thing isn’t my favorite trope. The further I got the more I enjoyed it and by the end of the book I really liked these two together and saw how good they were for each other. It also was fun to see the couple from book 1 as side characters now and some recurring as well as new side characters. I also liked visiting this fictional theme park again and seeing some familiar parts again as well as seeing more of the space part of the park. All in all this was a great sequel and I am looking forward tor book 3!

4 responses to “Review: Mischief and Mayhem by Jaxon Knight”