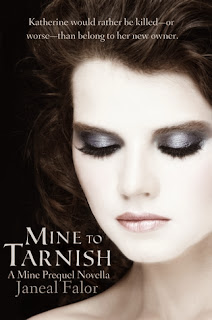 Blurb:
Katherine’s place is the same as any woman’s—on the shelf next to the dresses and bolts of cloth. When she’s sold to a warlock, life grows even bleaker. Her new owner is as old and rancid as he is cruel, driving her to do the unthinkable: run.

Nothing prepared her for being on her own. And she’s definitely unprepared for the warlocks hunting her down. But she must stay one step ahead because if caught, the best she can hope for is death.

I bought the first book in this series some time ago, but haven’t gotten around to reading it yet. When I noticed there was a prequel and it was on Netgalley I decided to read the prequel first. Mine to Tarnish is a nice introduction to the world in the Mine series and frankly it’s a world in which I wouldn’t want to leave. There is magic, but only men can access the magic in their blood and women are only property if men who can use their magic and need them to produce an heir. So setted in this world Mine to Tarnish tells the story os a girl who doesn’t want to be owned and decides to escape that fate.

I really liked this short story and I think it’s nice to know Katherine’s background as I am hoping she will play some part in the first book. But it is a short story and it’s short. A lot happens in this book, but while the pace was okay, it still felt like some things went to fast. Actually the writing style and pace is relatively slow, but the events just follow each other more quickly then they would have in a normal book. There isn’t a lot of time to get to know the side characters and some scenes seemed to happen to quickly after one another. I did enjoy this short story, but it was a bit short and while there was enough world building to get a sense of the world there wasn’t enough about the characters. I did like Katherine, but I wanted to know her better, to really know what she was feeling. The short story is more focussed on the story then the characters.

After finishing Mine to Tarnish I am curious for the first book in this series. i want to know if we met the main character of the first book already and which part katherine will play in book 1.

To conclude: this is a nice short story which provides the reader with some background information of Katherine while also introducing the reader to the world of the Mine series. It makes me looking forward to the first book, but it also felt a bit short and scenes followed each other a bit too quickly and there isn’t a lot of attention for the characters.

You can buy MIne to Tarnish here:
– Amazon