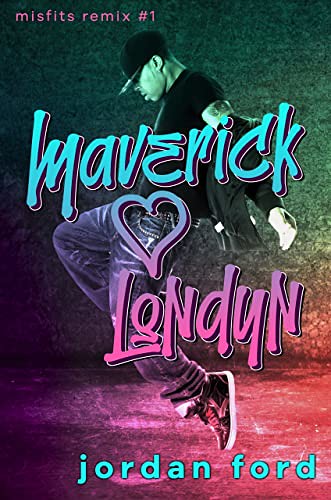 Blurb:
At Haven Academy, if you’re not a rich kid, you’re a charity case. The two don’t mix. And they certainly don’t fall in love…

Troublemaker, Maverick, knows he doesn’t belong in the wealthy hallways of the elitist boarding school, but he’s still managed to make some friends along the way. Outcasts just like him—the Haven Misfits, a newly formed dance crew trying to prove everybody wrong about them. There’s only one unspoken rule in his crew—don’t fall for the pretty rich girls. But when he comes across one with a bleeding lip and tears in her eyes, all rules are forgotten.

Londyn knows to steer clear of the school’s bad boys, but when she’s assaulted by one of her own, it’s Maverick who’s there taking care of her. He makes her feel safer and more protected than the gates her family and friends hide behind. He’s her knight, and her friend, and then…something so much more.

But can this fairytale romance last?

As their newfound feelings are exposed, it threatens the truce that keeps the two worlds living in harmony, and when a war breaks out between the haves and the have nots, friendships, loyalties and their hearts are put on the line…

Maverick Loves Londyn is the first book in the Misfits Remix series. It does tie in with this author’s other series Haven Hallways under her pen name Melody Sweet. I do think this book can be read as a standalone, but feel like I could enjoy it more because I already read Just a Little White Lie. In Just a Little White Lie Maverick’s story already starts and we get to know the misfits and see Maverick struggle with his anger and learn about his background. This book feels like a continuation of that story, but the romance starts in this book.

Maverick Loves Londyn has a bit of a Romeo and Juliet vibe romance. Maverick is from a poor household and is one of the charity cases the school picks to attend. He has a close group of friends who call themselves the misfits. A lot of the other students look down upon the misfits and think they don’t belong there. Londyn is from a rich household and struggles living up to all the expectations from her parents. She runs in the popular circle and a lot of her friends look down upon the misfits. She doesn’t think it’s right how they treat the misfits, but doesn’t have the courage to stand up against them at first.

I really liked seeing these two characters meet and fall in love with one another. They have this very intense and consuming romance. It’s clear they would do anything for the other and they actually do a lot for the other. They both fight hard for what they have and both have to face their friends disapproval. Londyn struggles standing up to her friends and speak the truth after she gets sexually assaulted. I like how she slowly finds her voice and fights for what she believes in. Things escalate and tensions run high. It was awesome seeing how things got resolved at the end and how these two find their way together.

There are some very sweet and touching moments. These two are so good together, but they have a lot going against them. I liked seeing how they dealt with everything. I thought their romance was well done and how there were plenty of scenes where we see them together and feel their connection.

I was a bit sad with how the school and a lot of the students treat the misfits, but it’s great to see how they did have some people in their corner. There are some awesome teachers who do believe in the misfits and fight for them and that was great to see. I also liked seeing how close the misfits where and we also see a few of the rich side characters that are interesting.

To summarize: This was a great start to this new series. I do recommend checking out the Haven Hallways series by this author’s pen name Melody Sweet as that one ties into this series. I liked Maverick and Londyn and their romance. I liked seeing them fall for one another and there are some great scenes where I really felt the intensity of their feelings. They have a lot going against them, they are from different sides and their friends hate each other. I liked seeing how they dealt with things and how everything got resolved at the end. It was sad to see how many teachers and students didn’t like the misfits and felt like they didn’t belong, but there are also some great teachers who care about the misfits and have their back. There are some interesting side characters, both misfits and some of the rich students too and a set up for the next book’s romance. I look forward to the next book in this series.