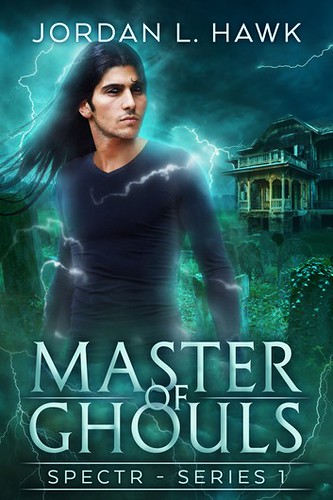 Blurb:
Caleb Jansen’s old life is in ruins after being possessed by the vampire spirit Gray. Now all Caleb wants is for Gray to be exorcised so he can adjust to living as a registered paranormal. Instead, District Chief Kaniyar of SPECTR offers him a new choice: be locked away for public safety, or come work for the very agency he’s spent years trying to avoid. The only good thing to come from Caleb’s possession is his relationship with federal exorcist John Starkweather, but even that seems doomed to end before it can really begin.

John’s newest case is a nightmare: someone is summoning demons and forcing them to possess women and boys snatched from the streets of Charleston. If his team can’t find the summoner soon enough, the possessions will become permanent, transforming the victims into ghouls. To make matters worse, he barely prevents Gray from feeding on their only lead.

Can John shield his heart from Caleb, who only seems interested in a temporary hook-up? Can Caleb keep Gray under control while they hunt for the summoner? Or will the cost of solving the case be higher than any of them could have guessed?

Because the master of ghouls has set his sights on a new target: Gray.

This was a great sequel, it basically starts off where book 1 ended. Caleb and John go to out to a club one evening and stumble upon a ghoul. This turns into another mystery to investigate and Caleb has to come to SPECTR headquarters for an offer and to get registered,

I liked how the ghoul plot line gets resolved in this book and the other plot lines seem to continue throughout the series. I especially liked seeing more of Gray and Caleb and I feel like I slowly get to understand Gray more. I just wish there were conversations between the two, but Caleb isn’t curious, he just wants his own life back and it determined to keeps seeing Gray as the enemy. Then there is the romance plot line as well. It all blends together nicely. The books are a bit short and while I wouldn’t mind if they were a bit longer the mystery/ plot of the book was expanded a bit. But these are nice short and fast paced reads so far and I enjoy them.

The romance turns a bit angsty somehow in this book. It starts off with them enjoying each other’s company, but then suddenly there is lack or communication and miscommunication coming between them and they are both fearing the other doesn’t care as much as they do, but at the same time don’t communicate that. At the end of the book they do seem to find their way back to one another for now, so at least it got resolved quickly.

This book expands upon the characters and world a bit. There is more we see of some side characters as well and I liked seeing how they reacted about Gray. There is some more we learn of John’s backstory and we see a bit more of how much Caleb fears SPECTR when he has to visit, but there are small bits and pieces. I sometimes don’t really care for how Caleb acts, with his grumpy attitude and trying to keep everyone at a distance, but still craving affection and not really saying what he thinks.

I liked learning a bit more about Gray and this book again shows the danger of NHE, but we don’t get to know a lot about them. They’re mostly the evil guys and there are some human evil guys as well, like the master of ghouls the title refers to. The world does get a bit more fleshed out.

To summarize: This was a solid sequel. It has it’s own plot line that gets resolved about the master of ghouls. As well as some side plot lines that continue throughout the series, like the romance and learning more about Gray. I didn’t really care for how the romance turned angsty suddenly with them both thinking the other didn’t care as much, but I am happy that got resolved by the end of the book. I like seeing a bit more of the characters and world. These are short and fast paced reads and I look forward to the next book.

2 responses to “Review: Master of Ghouls by Jordan L. Hawk”