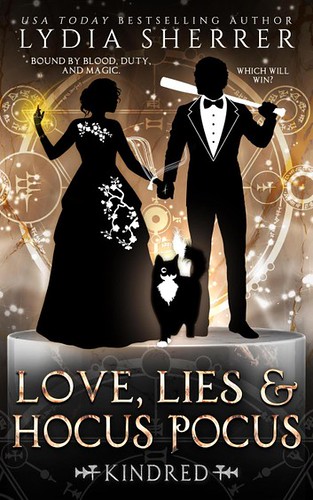 Blurb:
Bound by blood, duty, and magic. Which will win?

Lily Singer’s allies and family are determined to hold John Faust accountable for his actions, but doing so may create more problems than it solves. From political intrigue to international alliances, Lily, Sebastian, and Sir Kipling must venture out into the larger wizard community and survive the first Wizard Convocation held in almost a century.

And they can’t just survive, they must win.

Because the enemy they thought they’d defeated was only just getting started, and he always keeps his promises…especially when they involve death and destruction. With her ne’er-do-well witch and magical talking cat by her side, Lily will have to navigate broken family relationships, a daring rescue operation, and the struggle between light and dark within her own soul.

They may have won the battle, but the war has only just begun.

I was excited to dive into this latest Lily Singer book. I’ve really enjoyed this series so far and was curious to see where things go in this book. Luckily the author included a summary of the previous books at the start as it’s been a while since I read those. The summary was really well done and easily got me back into the series and reminded me of what had happened. Then it was time to read Kindred.

I had a great time reading this book. I enjoyed spending more time with Lily, Sebastian, Sir Kipling and the rest. I really like these characters and it was great being back in this world and reading about them. The book is a bit slow paced at times, but in a good way. There still is a lot happening and this book felt quite full with character development as well. Lily struggled mentally after what she’s been through in book 6. I had a few tough weeks while reading this book and I have to say it was nice to spend some time reading about someone else’s problems. Lily is going through some tough times and while it was hard to see her struggle it made her feel very real. I liked seeing how she dealt with it all and how she changed and handled things.

The first half of the book mostly deals with a more political plot line as Lily and her allies have to present evidence of why John Faust is a danger to wizard society. There were a lot more wizards we see and more about wizard society we learn. I did feel some parts could’ve been sped up a bit, but it did keep my attention. The second half of the book felt more fast paced as Lily and her friends and family have to deal with quite the situation. There was more action in the second half too. I did feel there was a lot reacting to things there, but it made sense and I liked seeing how they handled things. There are some great developments and some hints that make me curious to know more. The ending makes me excited for the next book and to see what will happen.

I would’ve liked to see more of a certain plot line develop as I felt they don’t make as much progress with that, but I feel that this set-up was necessary for how it sets the stage for the next book. It also bothered me a bit how much John Faust there was in this book and how much Lily has to deal with it. I don’t like reading about him and the way they had to deal with him. Plot wise it made sense, but I just wish he would’ve gotten locked up somewhere far from the characters so they didn’t have to deal with him.

One of my favorite parts of this book is seeing Lily and Sebastian together. They’re finally a couple and I loved seeing them together. There are a whole bunch of great scenes with the two of them. I like how supporting they are of each other and how they’re for the other. A decision Lily makes at the end and the way she really accept Sebastian was beautiful. There’s also plenty of Sir Kipling who is so fun to read about.

There are a lot of new characters in this book, which could be kinda confusing at times and with two big Italian families introduced I definitely forgot a few times who a certain side character was. The more important side characters get more screen time and it was easier to remember who was who then.

To summarize: I really enjoyed this seventh book in the series. It was great to be back in this world and spend time with these characters. The pace felt a bit slow at times, but there is plenty going on. The first half has a more political feel as they try and convince other wizards to take action towards John Faust. The second half is more action packed. I wasn’t a fan of how much John Faust there is in this book, although it did make sense, I just don’t like the characters have to deal with him so much. I especially liked seeing Lily and Sebastian as a couple in this book, they are so sweet together and I really enjoyed reading about them. There’s plenty of Sir Kipling too, as well as the other characters we’ve gotten to know over the course of the series and plenty of new side characters. The ending has a nice twist and makes me eager for the next book!