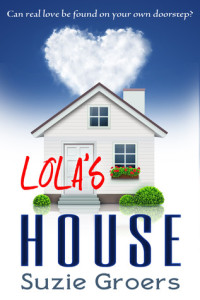 My Review:
When I saw Lola’s House for free on amazon, I decided to grab it. It sounded like a light and fun story. And that impression turned out to be pretty accurate. I also though it was funny and a bit weird to read about a main character that has the same name as me.

I really liked this story at first, it’s a light story about Lola who owns a vintage shop and a lovely house. The house needs some renovations and a big part of the story focusses on the house. Lola loves her house and wants to stay there, but some other characters have other plans for the house. Lola also owns a vintage shop and there are some plot lines about her working in the shop and planning promotions and things to get more sales. The story was enjoyable, but it was all a bit predictable and some part where a bit slow.

Most of the characters where a bit annoying. Lola was a nice character and I liked how she owned the shop and house and her plans for it. She worked hard for what she believed in and was a nice character in general. Chrissie was the pushy best friend, who talked Lola into some things and I thought Lola could stand up for herself a bit more. She easily let others convince her of things and I thought Lola could think things through a bit more before agreeing. I also would’ve liked some more inner dialogue, because even though it was told from first person point of view there where a lot of times I had no idea what Lola was thinking or why she did things or if she even thought about certain things at all. Then there’s Muriel, who works part time at Lola’s vintage shop, although strangely she’s always there in the scenes that take place at the shop. Muriel was mostly a fill up character, we don’t get to know a lot about her and she’s mostly there to listen to Lola and offer some advice. And then there’s Lola’s Mom and her brother Alex, who are nasty character who only seem to push Lola to do certain things. And Alex just seemed to want to make profit from Lola and her house. I though it was a bit strange how there didn’t seem to be any family bonds or emotions between them, not even a little bit. The only side character where we learn a bit about is Chrissie, but then I didn’t really care about her.

Then there was the romance. There isn’t a real love triangle, but there are two men who seem love interests at first. Then Lola goes with one of them and it just felt off to me. He just rubbed me wrong and annoyed me and I couldn’t see why Lola gave him a chance, she just seemed to go out with him because she though it was the right thing to do. I didn’t really feel any passion or romance between them. I did like the other guy a bit more, but they never took the time to explore what was between them and to get to know each other, as she was with the other guy. Frankly the romance was a bit frustrating and I wanted Lola to stand up for herself and think about what she really wanted. And then the ending was a bit weird how quick things changed and happened. I also would’ve liked to know a bit more from Lola and what she thought about these men, as I felt like we didn’t really get to know Lola her thoughts and emotions.

To conclude: Lola’s House was a nice and enjoyable story, if a tad predictable. I liked Lola, although I thought she should stand up for herself a bit more. I didn’t really care about any of the other characters. And the romance was a bit frustrating. But it was still a nice and light read.

You can add Lola’s House to your to-read list on Goodreads.