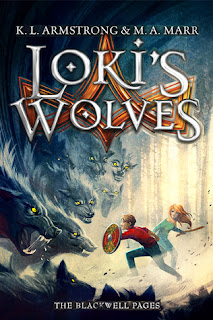 Blurb from Goodreads: In Viking times, Norse myths predicted the end of the world, an event called Ragnarok, that only the gods can stop. When this apocalypse happens, the gods must battle the monsters–wolves the size of the sun, serpents that span the seabeds, all bent on destroying the world.

The gods died a long time ago.

Matt Thorsen knows every Norse myth, saga, and god as if it was family history–because it is family history. Most people in the modern-day town of Blackwell, South Dakota, in fact, are direct descendants of either Thor or Loki, including Matt’s classmates Fen and Laurie Brekke.

However, knowing the legends and completely believing them are two different things. When the rune readers reveal that Ragnarok is coming and kids–led by Matt–will stand in for the gods in the final battle, he can hardly believe it. Matt, Laurie, and Fen’s lives will never be the same as they race to put together an unstoppable team to prevent the end of the world.

My review:
As soon as I heard about this book I was a bit surprised that kelley was writing a book for a younger audience, but I also had the thought that I would read her books no matter for what age categorie. And this book turned out to be very good.

Even though it took me a week to finish this book, I really enjoyed it. When i was reading it I didn’t want to stop. The story was really interesting and while I was afarid I wouldn’t like it as much because it was geared towards a younger audience that wasn’t the case, although there were a few scenes where things were a bit too easy for the characters or where in my opinion there wasn’t enough emotion and feelings. Also some things weren’t explained and I sometimes wondered how certain characters reacted, but we didn’t got to see their point of view.

The characters are really likeable. It starts off being told from 3 different perspectives and even though the cover shows them working together I didn’t believe that would happen as I started the book. Matt, Fen and laurie all have an unique voice and are great characters. Each had their own motivations and I really liked getting to know all 3 of them. I also liked the fact that it was told from 3 different perspectives, although sometimes I missed the perspective switch simply because I didn’t read the chapter name and the name which indicates who’s pov it was. This caused me to somtimes be a bit confused, but usually I figured out quite fast who’s pov it was. Just remember to actually read the chapter name and this will be no problem.

This book focusses on North Mythology and I haven’t read that many books abaout North mythology and like every mythology book I lack the background. Lucky for me there is just enough background given is this book to understand most of it. While I would’ve liked more background about the myths, this isn’t a book about those and I think there was a perfect balance by giving enough information about the myths, but not having too much of it. I also liked how there was a also room for change and free will. Nothing was set in stone.

To conclude: I really liked Loki’s Wolves. The story is interesting and fast paced and I really liked the characters. Although some things were a bit too easy for them, I did enjoy this book overall. The world building was also done well with a great balance of story and information. All in all I am really looking forward to the next book in this series.