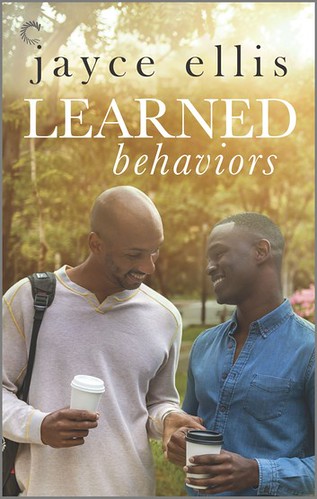 Blurb:
Two single dads meet at the office where it’s hate at first sight in this new series from acclaimed author Jayce Ellis.

Sending his daughter off to college is the proudest day of single dad JaQuan Reynolds’ life. Everything took a back seat to raising her—including his career. He has no idea what comes next, but his newfound freedom is quickly curtailed by a crash deadline at work and the uptight, hovering presence of consultant Matthew Donaldson. He’s surly and insufferably sexy, and Jaq’s ready to check him out and write him off—right up until a work assignment forces them together.

Every day. From now until Thanksgiving.

Work and fatherhood have been Matt’s whole world for years now, ever since his marriage ended. His eldest son is getting hitched over Thanksgiving weekend, and he’s not going to let a work deadline get in the way of celebrating with his family—not this time. The hours aren’t a problem, but the executive assistant on the project might be. Jaq’s sexy voice makes Matt yearn for things he let go of a long time ago.

Lust isn’t on the schedule, and neither is longing. But as the weeks go by, Matt and Jaq are forced to reevaluate their plans…and discover that even the most tight-knit of families can make room for one more.

I liked the sound of this one and decide to request it when it showed up on Netgalley. When I was in the mood for a contemporary romance book I decided to pick this one up. I liked reading this book, although something was missing to fully make this a win for me. Learned Behaviors is the story of two workaholics who fall in love and have to navigate their beginning relationship while also navigating their work and family life.

I liked the set up of this book with both main characters being single dads and their only/ youngest kid being off to college now. I was especially curious to see how Jaq would deal with it, he became a dad when he was young and most of the past years resolved around his kid, now he has to figure out who he is. Sadly there wasn’t as much focus on that as I had hoped, it mostly was about his work and the romance.

On the topic of work there are a lot of scenes resolving around that. And I have to admit at times it made me a bit uncomfortable with how their work lives went, these are both big workaholics who aren’t always treated right by their boss or assistant. There are plenty of relatable scenes here and as someone who struggled with life and work balance in the past that part definitely felt realistic, but at the same time I just didn’t find it that interesting to read about. The solution to some of the work problems is pretty clear while reading, but they didn’t really seem to work on it at all until the last few chapters.

I liked both main characters. Matt had a bit of a gruff exterior at first, but it was nice to see him warm up to Jaq and the people they worked with. I liked reading about their relationships with other characters and how they dealt with it, although at times I would’ve liked a deeper look at their personalities.

Then there are plenty of side characters as well. I liked Matt and Kendra’s friendship. As well as seeing how Matt interacted with his family, especially Halo and I had hoped for a bit more scenes were he tries his best to better relate to her. It was clear he wanted to, but it felt like it never quite made it into the book. It was fun to read about Jaq and his daughter and how they interact and resolve things. Jaq’s new friends were nice enough, but it felt like they got added just so Jaq had his group of friends to talk with and ask for help at times. I never felt like I really got a good feel for their personalities. There are also some side plot lines regarding some side characters that don’t get resolved, although I feel that some of Jaq’s friends will get their own book and those were simply the set ups for their stories.

For a long time I didn’t really feel the romance between Jaq and Matt. At first it just felt like mutual attraction and they didn’t quite like each other. It had a bit of enemies to lovers vibe at first, but not quite, as that dislike part got resolved quite easily once they worked together more. I just didn’t really get why they fell for each other and would’ve liked to see more scenes of them spending time together outside of work, especially the early start of their romance was mostly set at work. By the end I did warm up to them and liked the romance more. Until the forced drama at the end and the weird way one of them was going to solve it and then it was weeks later. Then there was the big gesture scene which didn’t feel as fitting for the characters as what I initially expected to happen. I would’ve liked to see an epilogue as it would’ve been nice to get a glimpse of their future.

To summarize: this was a solid work place romance type story. I mostly enjoyed reading this book, but it was missing something to make me fully invested. I liked the set up of them both being single dads and how Jaq now had to figure out who he was without having to focus fully on providing for his kid, but I felt like that wasn’t developed as much. I liked how relatable and realistic the works scenes were, but sadly I just didn’t find it as interesting to read about. I would’ve liked a bit more scenes with the couple connecting outside of work. I liked the main characters, but didn’t quite feel the romance for a long time. I didn’t care for the drama toward the end and the way it resolved it felt a bit off. There are some interesting side characters and some plot lines that are left open probably for future books in the series. I felt that a work related plot line got resolved a bit too sudden and easily toward the end and would’ve liked a bit more build-up/ talking about that earlier. All in all if you’re looking for a work place romance with a hint of enemies to lovers at the start this one might be for you.