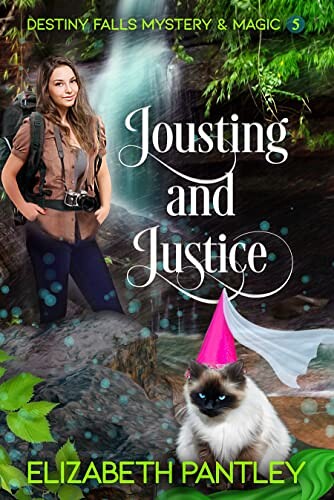 Blurb:
An invitation to a medieval festival. A ferry ride to a mysterious island. A scheming, inept witch. An office break-in, an unidentified body, and a string of suspects. Can Hayden, her brave, sassy cat, Latifa, and the people of Destiny Falls solve the mystery and enjoy the festival?

Jousting and Justice follows the series format of combining two stories that blend into one. A murder mystery and the island mystery.

The Island Mystery: Hayden and all her friends get an invitation to a medieval festival – but it’s on “the forbidden island.” It’s too enticing to pass up. Of course, strange things will happen once they get there! . . . You’ll also learn the truth about the witch’s sister!

The Murder Mystery: A dead body shows up in the most shocking place. First, they need to figure out who this dead guy is. Then, who killed him and why. There are so many twists and turns on the way to the answers! But we know that Hayden, Latifa, and their family and friends will figure it out and justice will be served.

Hayden’s many adventures in Destiny Falls will keep you guessing with each book in this intriguing series.

Jousting and Justice is the fifth book in this series and I was excited to return to Destiny Falls for another visit. I picked this up when I was in the mood for something light and fun and this book definitely delivered. This is such a fun series! There’s something magical and whimsical about the town of Destiny falls and it’s such a lovely place to visit. But there is danger and mystery too.

In Jousting and Justice there is a lot going on. There’s another murder mystery, an upcoming medieval festival as well as some ongoing character related plot lines and mysteries. There are some great reveals and twists and turns in this one too. We finally learn who the good witch is who lives in Destiny Falls and the reveal made perfect sense, but I totally had guessed wrong. This book kept me reading and I was sad when it ended.

The mystery was an interesting one with a few well done twists. I liked how Hayden got involved this one and it was interesting to see what they find out along the way. The reveal at the end of why had done it took me by surprise, it made sense, but also made me sad.

The build up to the medieval festival that takes place late in the book was fun. Everyone is preparing for the festival and looking forward to it. It was fun to read about this. As the reader you also get a few chapters from the point of view of the evil witch and this adds some tension to the book as I wondered how they would avoid the fate she had planned for them.

It was fun to spend some time with the big groups of characters in this book. It’s so nice to see Hayden be surrounded by such a large group of friends and family and how everyone looks out for her. It’s great to see how much she appreciates all of them too. And it’s nice to see more of all the characters and learn new things about them in each book.

The magical vibe of this series is great and I like how the magical aspect is a bit more subtle, but very interesting. From the ever changing house to the Hayden’s ghostly friend, to the way the magic of the island works and the witches ofcourse. It’s always fun to spend time there and see more of the magical island.

To summarize: This was another fun read in this series! This book has a lot going on with another murder mystery, an upcoming medieval festival and several character related plot lines. I really enjoyed this book and following Hayden along as she prepared for the festival and tries to solve the mystery. The mystery and plot had some interesting twists and turns and took me by surprise multiple times. It’s so fun to read about Destiny Falls and the characters that live there and it’s always a joy to read another book in this series. I am looking forward to the next one!

2 responses to “Review: Jousting and Justice by Elizabeth Pantley”