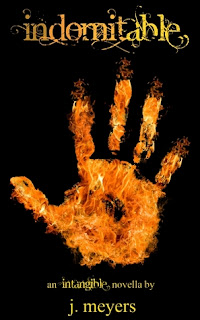 Blurb from Goodreads:Perhaps the most dangerous person to gain unimaginable power is the one who feels oppressed.

And full of wrath. For very good reason.

My Review:
I really enjoyed the first book in this series, so I was excited when I heard there was another short story coming out. This short story tells Jonas story, only minpoint is that I couldn´t remember who he was exactly he was, because it has been some time since I read book 1. Later on I found out that actually this short story takes place before book 1 and it isn´t nessecary to know who Jonas is.

This story gives us some more background about Jonas. The beginning I was a bit confused about who Jonas was and when it all took place, but in the end I finally got a good sense when this took place. Some parts are flashbacks, which I am not a big fan of, but at least it was obviously which chapter were in the past and which in the present time. Some parts contain some gruesome details and his past is a bit dark, but it was interesting to know how he became a vampire. I especially liked the ending because there was a link with something that happens in book 1.

To conclude: a nice story, that gives us some backrgound about Jonas. I was a bit confused at first about who Jonas was and when this took place, but in the end this became obvious. I liked the ending and after reading this I am really looking forward to read book 2.

One response to “Review: Indomitable (Intangible #0.75) by J. Meyers”