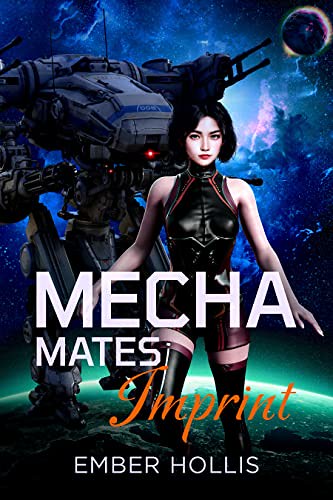 Blurb:
Three elite pilots, and the stowaway girl who imprints on their mecha.

Space is a hostile environment, but I’m a survivor. That’s why I’ve lasted this long on the Odessa—the biggest interplanetary starship ever built. Everyone aboard is celebrating the end of the Kraw War, and the elites are too busy patting themselves on the back to notice me.

That is, until I accidentally ‘sabotage’ their mecha, Hades.

It was a complete accident, believe me. The last thing I want is a gigantic robot imprinting on me, or to trespass into its pilots’ telepathic link. But when the Kraw ambush the Odessa, I’m suddenly grateful for my hidden talent. It’s the only thing I can rely on when the war heroes and I crash land on an uninhabited planet.

Now all that matters is survival. Though there’s no way I’m revealing my abilities (or that I can hear every thought they share about me). I’m willing to work together with them, but the plan was always to part ways for good.

So why do I get the feeling, that when the time comes… they might not let me go?

I loved the idea of a scifi romance book with a mecha in it, so I decided to request an ARC of this book. Unfortunately this book ended up being a bit of a mixed one for me. I liked the concept with the mecha and how a girl imprints on it and gets connected to it’s 3 pilots. It also was a fairly easy to read book with enough going on that it was easy to keep reading. The female main character has an unique power to interact with technology which was really cool and I wish we had seen more of it.

After reading the first chapter I almost DNF’d it right away as the way the romance starts off I felt like I wouldn’t enjoy this book. And that did seem to be true when it comes to the romance. I decided to give it another try and started to enjoy the book more after that first chapter. There is some mystery about the female main character Maia and I was a bit confused at first as I didn’t really get what she was doing there and where she came from, but slowly we get a few more hints about that. I guess it’s supposed to be a mystery for the reader as well, but I rather would’ve known a bit more about her from the start.

My biggest issue with the book was that I had trouble really connecting with it and caring about the characters. The story kept moving forward and kept me reading, but I was never as pulled into it as I would’ve liked. It just felt like the book was missing something, most parts where okay, but none really wowed me. There were a few scenes that made me uncomfortable. The steamier scenes all felt like dub-con to me as none of them actually involve consent, but the female main character was into it from what I could tell, but those scenes didn’t work for me. They aren’t actual sex scenes in the usual sense, but I still felt a line got crossed in all of the steamier scenes.

I struggled with the romance. The three guys are quite wary of Maia for most of the book and I just didn’t really feel a connection between them and Maia, except the mental bond they share. I had hoped the misunderstanding and suspicion would’ve been clearer up faster, but Maia doesn’t open up, keeps secrets and the guys stay suspicious. There is some mutual attraction and I liked seeing two of the guys believe she wasn’t as bad at the end, but I would’ve liked a bit more. The guys where pretty different from one another and easy to remember who was who. Although I did feel that the guys all fell into a certain personality type and I would’ve liked to get to know them better besides that. And all of them did things I didn’t like at some point of the book.

I would’ve liked more world building, we get enough information to understand what’s going on, but the world didn’t really come alive to me. I wanted to know more about the mechas and see them in action and understand how this galaxy worked and the reason why there was a war with some aliens. I also had hoped for more from the action scenes, they were pretty short and not as cool as I would’ve hoped for with the fact it involves an actual mecha. I am glad the action scenes weren’t as gory with the monsters they’re fighting later on.

To summarize: I really liked the concept and the set up for the book, but the actual execution didn’t quite work for me. I liked the mecha and the cool tech related power the female main character had. The story moved with a good pace and there was enough going on, but I never got fully pulled into the story. I didn’t really feel the romance as most of this book the guys are wary of the girl and the girl is keeping secrets from the guys. There are some a few scenes that made me uncomfortable due to the lack of consent involved even though the female main character seemed to be okay with it I think. The characters were okay, but I didn’t find them as likable or really cared for them. There’s some mystery in the past of Maia the female main character and I felt like we didn’t get to know her as much due to that. The world building is sufficient to understand the plot, but didn’t really come alive for me.