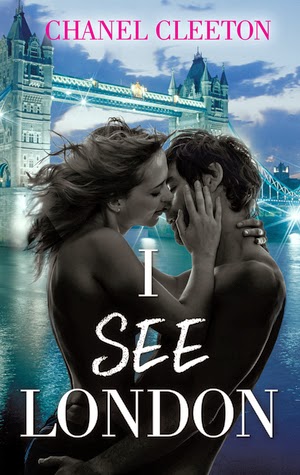 I See London
by Chanel Cleeton

My review:
I got a copy in exchange for an honest review.

I first came across this book when I saw the cover reveal on a blog I follow and I thought the blurb sounded really good. Unfortunately this ended up being just an okay book for me. It’s just another New Adult book and while it has some unique elements, it just wans’t enough for me. The focus of this book is mostly on the romance, the characters and the story. There isn’t a lot of attention for things like the actual lectures the main character takes or exploring the city of London, which I did expect. On the other hand the book has a nice pace and I did like the writing style. It was an easy book to read and I did enjoy it, despite some of my issues.

The story is about Maggie, a good girl who studies a lot and end up going to the International School in London. Where she seemingly transforms in a girl who likes to party, lusts after two boys, meets some new friends and studying comes second to that.

Also life at the university in this book is very different than how I experienced my time at university, it just felt really different. The focus more on partying and less on studying and talking about classes, but that can be because I studied in the Netherlands and other schools might be different. Or it may just be because I was that girl that studied a lot an didn’t go out much. The uni in this book jst felt more like High school to me than uni, with the way people acted.

There are also some problems I has with some of the plot, like how everyone at the International School seemed crazily rich. And then there was the prologue, which just felt off and even afer finishing the book I had no idea how it related to the rest of the story. And I had some other issues which I won’t mention here, because they would be spoilers. There was a scene towards the end of the book that just felt wrong to me and I found myself skipping most of the scene. Also I expected to learn more about London and really connect with the city as the location seemed important, but in fact it felt more like the background, it could just as easily be just another random big city.

I mentioned before that the characters are one of the focusses of this book, but I mean this in the sense that the character relationships and their actions are important. I felt that while the focus seemed to be on the characters, at the end of the book I still felt like I didn’t really know most characters. The characters we get to know the best are Maggie, Samir and Fleur and I still sometimes didn’t understand why they acted a certain way. It was difficult to relate to them, because I couldn’t get a good idea of who they are. There are also some characters like George and Michael who made an appearance sometimes, but by the time they made an appearance I had trouble remembering who they where, because we don’t learn a lot about them and they didn’t really make an impression.

And then there is a love triangle, from the moment I read the blurb I already had my expectations about whom Maggie would choose in the end and even from the start of the book it was obvious too. There just didn’t seem to be a competition and I didn’t like the moments she spend with the ‘wrong guy’ as it seemes obvious to me she didn’t like him the way she liked the other guy and he just wasn’t interesting. I didn’t care about him and just wished Maggie would open her eyes and realize they had nothing in common and while she thought he was hot, they didn’t have any chemisty or anything else.

Also it is worth mentioning that this is actually the first book in a series and not a standalone as I first thought. The ending was pretty open, but also nicely wrapped up this school year, so it was a good ending too.

To conclude: I did enjoy this story, but it was different than I expected and ended up just being okay for me. The pace and the writing style was nice, but I has some issues with the story and had difficulties relating to the characters. The love triangle felt off to me and it was obvious with whom she would end up from the beginning.

2 responses to “Review: I See London by Chanel Cleeton”