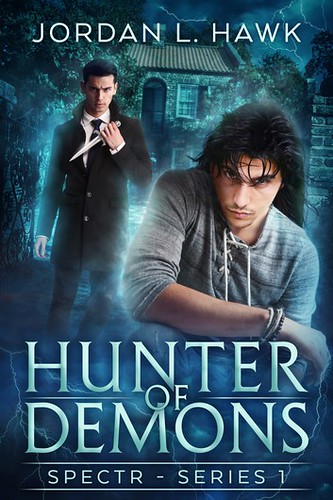 Blurb:
What happens when an exorcist falls in love with a demon he’s sworn to destroy?

Caleb Jansen’s life is going from bad to worse. First he’s possessed by an opinionated vampire spirit who drinks the blood of demons, then pursued by a fundamentalist group who want him dead.

His only hope is hotshot federal exorcist John Starkweather…the last man Caleb should be falling for, and the only one he wants in his bed.

I liked the concept for this series and decided to buy the box set which contains the whole SPECTR series. Hunter of Demons is the first book. It’s a relatively quick read, but I thought it worked well as introduction book. It introduces the reader to the main characters and the world and there is a plot line that gets resolved by the end of the book. Overal I enjoyed this one and look forward to continuing this series.

This is quite the fast paced read with plenty of action and danger and quite a lot happening to the main characters in a short while. It grabbed my attention and I was invested in knowing what would happen. Caleb wants to put his brother’s body to rest after a non human entity (NHE) walked away in his brother’s dead body, instead he ends up being possessed and placed under a sort of house arrest with agent John Starkweather form SPECTR. Caleb has trouble dealing with this big change in his life and doesn’t trust John. But the NHE that now inhabits his body with him was hunting another NHE and he wants to finish the hunt. The book does end rather sudden and I would’ve liked to know what the offer what this character was going to make Caleb, guess we’ll find out in the next book, which luckily I already have.

This book gives a bit of a feel for the characters and I felt there was enough to care for them and I look forward to getting to know more about them in future books. They both felt likable enough, but I don’t feel like I really have a good feel for either of them yet. John is an agent and feeling guilty of not catching the NHE who killed Caleb’s brother and determined to help Caleb. Caleb is so far out of depth and is struggling to adjust to his new reality. Caleb also has quite the attitude at first, but it’s also clear he’s afraid. And then there is Gray the entity inside Caleb’s head, who might be the hardest of the three to understand, but he sure was interesting and I liked the glimpses we got of him.

The way Caleb and Gray have to get used to one another and slowly start to communicate and work together was one of my favorite parts of the book. The way Caleb and Gray both now experienced the world differently was well done too. It also made sense Caleb was afraid and blamed Gray at first, but I assume their dynamic will change over the course of the series.

I liked the set-up for the romance, they both have mutual attention and I liked seeing them warm up to the other a bit and develop a bit of trust, although it did went a bit fast. And the romance also developed a bit quickly with their first sex scene being at the end of this book once they’ve known each other for slightly more than a day if I remember correctly. I would’ve liked a bit more build-up and them getting to know each other as now it felt that Caleb went from distrusting John to having sex with him a bit too quickly. I am looking forward to see how their relationship will develop from here onward.

There is enough of the world to get a feel for it, with the NHE’s and paranormal who are humans who have special powers. It’s pretty limited so far, but I feel like I have an idea of what is possible and look forward to learning more. I liked the concept of the NHE’s and how these entities can possess bodies. Gray was interesting to read about, while the others where more vicious creatures who end up going on killing sprees, at least in this book. While we meet some characters with paranormal abilities there hasn’t been much about that. And then there is the SPECTR organization ofcourse.

To summarize: Hunter of Demons is a promising start to this new series. It’s interesting, fast paced and has plenty of action and things going on. I found the concept of Caleb being possessed by another entity interesting and seeing how they adapted to life together in the same body. I liked both main characters and look forward to seeing more of them as I would like to get to know them better. Although the romance did develop rather quickly, I look forward to seeing how that develops in later books. There is a bit of world building, enough to get a feel for the world and I look forward to seeing it get fleshed out more in future books. All in all an unique twist on this genre and definitely a solid start to this series. I hope to pick up book 2 soon.

3 responses to “Review: Hunter of Demons by Jordan L. Hawk”