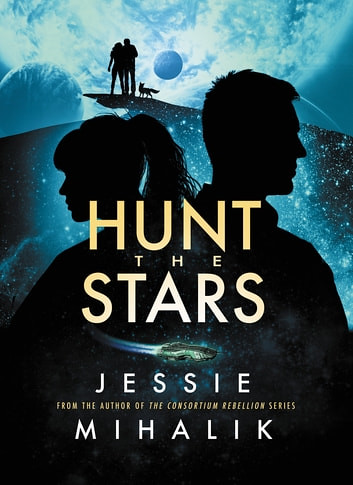 Blurb:
The critically acclaimed author of Polaris Rising takes readers on an exciting journey with the start of her brand-new series about a female bounty hunter and the man who is her sworn enemy.

Octavia Zarola would do anything to keep her tiny, close-knit bounty hunting crew together—even if it means accepting a job from Torran Fletcher, a ruthless former general and her sworn enemy. When Torran offers her enough credits to not only keep her crew afloat but also hire someone to fix her ship, Tavi knows that she can’t refuse—no matter how much she’d like to.

With so much money on the line, Torran and his crew insist on joining the hunt. Tavi reluctantly agrees because while the handsome, stoic leader pushes all of her buttons—for both anger and desire—she’s endured worse, and the massive bonus payment he’s promised for a completed job is reason enough to shut up and deal.

But when they uncover a deeper plot that threatens the delicate peace between humans and Valoffs, Tavi suspects that Torran has been using her as the impetus for a new war. With the fate of her crew balanced on a knife’s edge, Tavi must decide where her loyalties lie—with the quiet Valoff who’s been lying to her, or with the human leaders who left her squad to die on the battlefield. And this time, she’s put her heart on the line.

I really enjoyed Jessie Mihalik’s books so far and was excited to start this new series. I really enjoyed Hunt the Stars. It has an awesome slow burn romance, a solid plot and great characters. The story grabbed me from the start and I stayed invested and engaged for the whole book. Now I finished the book I am sad I finished it already and wish the next book was here already.

Hunt the Stars follows the point of view of Octavia, she’s the leader of a small bounty hunting crew. There is peace now in the galaxy, but she used to fight in the war that just ended. When an alien from the other faction asks for her ask she wants to say no, but the money he offers is something she can really use. So she grudgingly agrees. The two crews have to work and live together and slowly they starts to feel more like friends than enemies. I liked the bounty hunting plot as they have to find a stolen ring. And the way the plot got more complex the further we got. There are some interesting reveals and I liked seeing how it all played out.

I liked Octavia as a main character. She was capable and smart and cared a lot about her crew. I also liked her crew and seeing them all interact. Everyone had their own personality and it was easy to remember who was who. Even when the group grows bigger as the alien crew also joins them. I really liked the way they are such a close knit crew and how slowly the alien crew also becomes part of that. The way they have each other’s back was great to read about. There also is a cool alien animal that lives aboard their ship who was fun to read about.

The romance is quite the slow burn and I thought the slow progression was done well. Octavia basically sees Torran as the enemy and slowly she grows closer to him. I liked seeing how this took time and also how their initial hostility made sense as they fought on opposites sites of the war. And even later in the book there are sometimes still moments when those nasty memories from the war raise their head. I really liked Octovaia and Torran together. There is some clear mutual attraction as well as deeper feelings that slowly progress.

Another thing I really liked about this book was the world building and the way the culture of the alien Valoffs was established. I liked the way their different cultural habits made them feel like a different species and made sense too. From the way their social obligations and oath work to the way they apologize. It was interesting to read about and it gave them their unique culture and feel. I thought it was done really well and with just a few of those things they already feel like an entirely different species. Then there are their slightly different looks and telepathic powers as well.

To summarize: I really enjoyed Hunt the Stars. It had a solid set up and I liked seeing how the plot progressed. There are some interesting reveals later on and I was excited to see how it all played out. This book kept me engaged the whole time and I wanted to keep reading. I really enjoyed the romance and seeing Octavia and Torran slowly grow closer. They slowly forge a deep connection and there’s plenty of attraction too. I like how the romance progressed slowly and also how their initial hostility made sense. I liked reading about the crew and how close knit they are. Everyone had their own personality and it was easy to remember who was who. I liked the way the author established the world building and the culture of the Valoffs. I want to spend more time reading about these characters and look forward to book 2!

6 responses to “Review: Hunt the Stars by Jessie Mihalik”