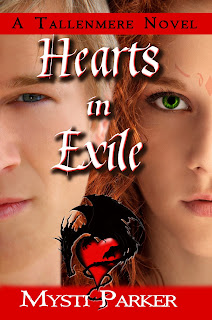 Blurb: In Tallenmere, fate has a way of catching up with you…

My review:
The blurb was what made me to decide to accept this book for review. It sounded like a book I would like to read. I was a bit hesitant because the title mentioned this was the 3rd book in this series, after reading it I can confirm that you don’t need to have read the first 2 books to enjoy and understand this book. Although after reading Hearts In Exile I also want to read those first 2 books!

Hearts in Exile is a story driven book, the story is the most important part of the book. There is always something happening and while the pace isn’t really slow nor fast, enough happens to keep my attention. The beginning felt a bit slow for me, but this is probably due to the fact I didn’t had much time to read and could only read small pieces. Also the beginning was a bit confusing as it starts then skips 10 years ahead and then makes a time skip into the past. Basically you get an idea about the characters and where they are present day and then there is a time skip in the past and you get their story from the beginning. At 75 or 80% in it skips to the present day again. The time skips take some getting used to, but when I understood there would be no time skips until the end I didn’t mind the time skips that much.

The story is about paladins, priestess, necromancers, gods, half elves, elves, dwarves and much more and while it contains some classical elements of fantasy books, it also manages to create an original world. I really liked the idea of the 3 gods where people believed in and their different roles. The romance also plays an important part and I loved the combination of fantasy and romance and how seamlessly the author interwove these two elements.

The characters are likeable and while I liked to learn more about them, we did get to know quite a lot about them. The story is told from two perspectives namely Loralee and Sir Robert. I loved reading how they fell in love and all they had to go through. Both are great characters and I kept routing for them and hoped they would end up together. Loralee is such a brave character who follows her head a lot and can be quite stubborn at times. Sir Robert has had a rough past and it was great to see how he developed and what he achieved. The side characters are interesting too, even though the focus is more on the two main characters, there is enough information about the side characters that they feel like real persons too.

One thing that bothered me a bit was that fairly early on I already knew who the ‘evil guy’ would be. It was pretty obvious and this character never even tried to hide her ugly and evil side. Loralee is a bit too forgiven and isn’t wary enough, even thought this character gave her enough reason to be wary. This bothered me a bit. Also at the end we never learn what happened with this character.

The world building is pretty original despite the few cliché elements it contains. The world building is done really well, there are no info dumps and most is learned through the interaction between the characters. I also liked the background on the three gods, Inessa, Omri and Drea and the roles they played in the story. Although I did wish there was more world building and I hope the first 2 books give more insight in the world of Tallenmere. The focus is on the city they grow up in and there isn’t much about the outside world. I would’ve liked to learn more about the rest of the world. At the end there is a nice piece of extra world building about the island and some history.

To conclude: I really enjoyed reading this book, it has a great combination of fantasy and romance. The book is story driven and the story was enjoyable. I also liked the characters and there is enough information to also make the side characters come alive. The world building is done really well, although I wished there was more world building. Although this book can be read without having read the first 2 books, after reading this book I want to read those first 2 books too!

3 responses to “Review: Hearts in Exile (Tallenmere #3) by Mysti Parker”