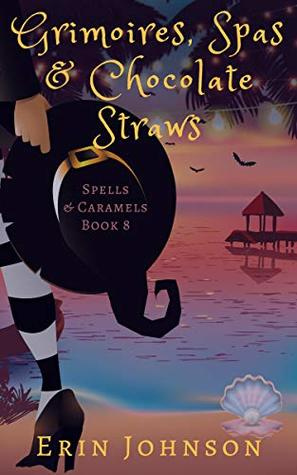 Blurb:
Sandy slaughter. An enchanting suspect. Can a magical baker protect her friends from a dangerous paradise?

Stranded on Badlands Island, Imogen Banks is driving herself crazy looking for her brother. So when the spell-casting baker’s friends suggest they escape for a luxurious dragon spa treatment, she doesn’t need a second invitation. But her hopes for coastal romance with Hank fall flat when a resort guest turns up roasted in the sand.

Suspecting murder, Imogen zeroes in on the town’s rumored “black widow” as a possible culprit. But when her friend falls for the beautiful woman despite the deadly track record, Imogen fears he’ll be the next victim to stay buried.

Can Imogen sift through the clues before the killer gives her one final treatment?

Grimoires, Spas and Chocolate Straws is the eighth book in the Spells and Caramels delightful paranormal cozy mystery series. If you like endearing heroines, a touch of romance, and unexpected twists, then you’ll love Erin Johnson’s magical whodunit.

I was in the mood for a fun paranormal cozy mystery, so I decided to pick up book 8 in this series. It was a joy to be back with Imogen, Iggy and all their friends. In this book they’re still on the island and decide to accompany their guard friends to visit a sea town filled with spas. They’re hoping for a relaxing vacation. Ofcourse things never go that smoothly and they land in the middle of another murder mystery.

The previous book I enjoyed less than the rest of the series and I had hoped this book would be better again, and it was. Now that I know they’re stuck on the island and wasn’t hoping for the overarching plot line to continue as much, I could enjoy it more as it was. Although I am still a bit sad there isn’t much about the overarching plot line that we followed more strongly during the first six books. There is a bit of explanation about that in this book and some interesting reveals regarding Horace, which I was missing in book 7, so I am glad it was present here a bit at least. That first scene with Leo felt like it came completely out of the blue and only made sense later.

I am happy to say that this book was a lot more fun again than the previous book, which is what I am looking for when I pick up one of these books. Now that they’re settled a bit on the island they have a bit of a place and friends too, things seem to go a bit smoother on that front. There also was more character interactions again and some of the side characters we met in the previous book, but mostly the friendly ones are left now. And ofcourse there is more Iggy. I love Iggy he’s such a great character,

The mystery doesn’t start till later in the book, but that kinda works here. They have to go to the town at the sea first before the mystery starts. The scene with the water and when Imogen meets Leo was a bit weird and felt like it slowed the start down a bit, but it all ties in more with the plot later. Then once they’re in the town at the sea the mystery gets rolling. A man dies while having the signature treatment at the spa and Imogen and the rest tries to solve the mystery.

The mystery wasn’t too complex. There are three main suspects sort of and they all have some sort of motive, it’s just figuring out who took it further and actually killed the guy. The strange thing is that for a big part of the book, actually up till the end of the mystery, they aren’t even sure whether the victim got killed or whether it was an accident. I am usually not a fan of those plot lines as I rather know that thing for sure as it always makes the main character seem a bit too suspicious someone with how they’re seeing a murder everywhere without proof.

It was fun to learn a bit about this town and the people in it and there’s also a tie with the monsters. We see a few more monsters, but it still a bit on the background. Besides the mystery plot line, there are some character related plot lines that continue. There are some new romances blooming as well. And there is just a little bit that nods toward the overarching plot line.

One thing that bothered me again in this book was the weird mix of Asian and western. This book is probably set in Japan, it’s never explicitly mentioned, but that seems to be the vibe the author is going for. But then other things don’t quite fit with that vibe, words that are used not quite in the right manner and Asian/ Japanese style thins that get combined with more western things. It was quite confusion and felt off to me. And throughout the book there are multiple such things and it keeps popping up in different situations.

To give an example the seaside town is first referred to as onsen town, when they arrive they only use the word spa suddenly, which does seem to be the right word for what these things are. And then later the word bathhouse is thrown in a few times. All of these words have a different vibe and meaning and it was just confusing how they’re all used for the same thing and how there was no consistent use of only one word. I am not sure whether the author didn’t do enough research or whether it’s done on purpose.

Something I did like about the setting the author creates is how she gives all these towns and happenings a magical touch. There is a monster watching festival and they have these magical themed gifts and items around. There are some magical creatures around and magic is used for some of the treatments at the spa. It’s a lot fun and I like how it’s subtly woven into everyday live, it makes it all feel more real.

I liked reading about Imogen again. I also like how she works closely with hank while solving this mystery. And their romance seems to be going well. It was nice to see Yann take a bigger role in this book with his infatuation with the Black Widow. Then there’s Iggy, who is one of my favorite characters, he’s just so fun to read about. Then there is the usual cats of side characters. It also was interesting to see Sam have a bit of a beginning romance with captain Kenta.

To summarize: This was another fun read in this series. I thought it was better than the previous book, which is partly because my expectations have been adjusted now. This story is again set on the island and there’s very little about the overarching plot line. I now expected this and it didn’t bother me as much, although I am really curious what’s going on with the reveals at the end of book 6. There is an interesting reveal about Horace in this book. And a bit of a weird scene with Leo at the start, which makes more sense later. This book had again that fun vibe I enjoy about these books. There is a mystery to solve and some characters plot lines as well. The mystery is pretty straightforward with 3 possible suspects and they have to figure out which of them is the murderer. I was not surprised when we discover who did it, but it was fun to follow along as the character discover the clues. One things that bothers me is the weird mix of Japanese and western style elements and words, I am not sure whether this is a lack of research or intentional. It’s confusing and feels off to me. I like reading about these characters and following them along as their stories progress. Only two more books to go in this series!