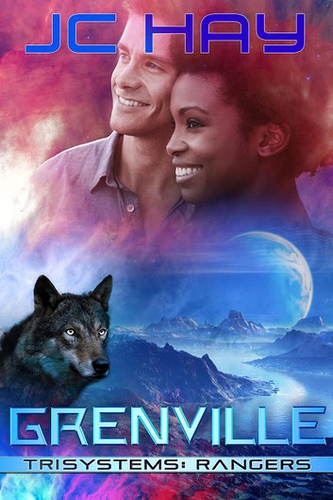 Blurb:
Are they orbiting each other, or falling?

Yancey Grenville thought he knew his place in the pack – the clown, the one who always made everyone else happy. A stress reliever for his battle family and for the women he’d spent time with along the way. No one to be serious about, and not someone to settle down with. An attitude that he thought suited him, until a solo mission with the one person he wanted to see him as more leaves him scrambling for a way to erase his reputation.

Lt. Imee Lewis fought tooth and claw to earn her reputation as one of the best pilots in the JTF, and no one cheered her on, or up, like the ranger she’d pulled off the battlefield more than a year earlier. Not that she thought she could ever be serious about “Good Time Grenville” – her own scars, and the divide of rank were enough to keep the relationship strictly friends.

But when a covert mission traps the two of them together in a half-derelict mining ship, proximity leads to more than familiarity. As the gravity between them gets stronger, they realize that the walls they tore down will be impossible to replace when the mission ends, and everything they’ve built for themselves could be destroyed.

After finishing Inouye, the first book in this series, I started Grenville right after. This is such a fun series to read. This time another member of the Bravo Fire team takes the spotlight along with the pilot he’s crushing on. There’s a great romance, a bit of suspense and action and ofcourse a lovable umbra wolf. I enjoyed reading this book.

Grenville follows the story of Grenville, who is in the same team as Inouye and made a short appearance in book 1. This is a series that can easily be read as standalone, but there is a bit of continuity. With Inouye and his wolf being in this book for a bit as well and a mention of his romance. This story follows a different couple tough and the storyline seems completely separate as well, besides the small appearance of Inouye and his wolf.

Grenville is the sort of funny guy you usually don’t see as the hero of a romance, but I liked him as main character. He’s know as good time Grenville, who doesn’t do serious. He has his own mental scars and likes staying casual. Until the sparks fly with a pilot named Imee who once saved his life. When they’re thrown together for an undercover mission they get to figure out what is between them.

Grenville and Imee both were likable characters. Just as in book 1 the author manages to give a good feel for both characters here even in a shorter read as this. I thought the character came alive well and I liked their romance. Imee fought hard to become a pilot and Grenville finally found his place with the rangers. They both work for the military and relationships between military members are frowned upon/ not allowed. They have some great banter and it’s clear they’re feeling something for each other, but they aren’t sure if it can go anywhere.

I liked reading about them growing closer and how they figure out what to do with the connection between them. There was some great build-up with the romance and I especially liked the moment they let their walls done and confided in the other. I just wished they communicated a bit more about the nature of their relationship and what they felt. As I really liked their romance besides that.

There is a bit of drama and lack of communication that causes a rift between them later in the book that I didn’t really care for. And I thought things got almost too suddenly resolved with a too big of a leap, it did sort of make sense, but it felt a bit too much too sudden. The romance really follows the typical set-up for a romance plot line and I wouldn’t have minded if the romance plot line differed a bit more from that. I also felt that both characters were to blame for the fallout, but only one of them apologizes, which felt a bit skewed to me.

I also felt that the plot line with the undercover mission was left a bit unresolved. The main focus is on the romance, but by leaving the undercover mission result hanging it really felt like it was only there as plot device to get the characters together and realizing the depth of their feelings. Or maybe the author simply saves that for the next book, that’s possible too. But those are just minor niggles, overall I just really enjoy these stories and they’re great if you want a quick read, but also a well done romance.

Djehuti is Genreville’s wolf and I loved how much part of the story he was. And also how we get to see the depth of the bond between ranger and wolf. It was interesting how Djehuti steadied Grenville and I liked how close they were. The world building still stays a bit vague and I would like to see the world come more alive, but we do learn new things about the world in this book and I hope the next books continue that trend.

To summarize: This was another great read in this series. I enjoy reading about these rangers, their wolves and the women they fall for. Grenville is the funny guy of the group, but he is hiding his own scars. Imee is the pilot who saved him once and also has her own struggles. They have some great banter going on, but they don’t take it further until they are chosen for an undercover mission together. I liked these two together and they have some great banter and especially liked the scene where they confide in each other. It’s clear these two care about a each other. I didn’t really care about the drama toward the end and thought it all got resolved a bit too sudden. The romance development is pretty typical for romance stories and I would’ve liked to see it differ a bit more. The author really did pull of a well written romance in a shorter read, which I think is great. I also really liked reading about the umbra wolves again and how we see the bond Djehuti and Grenville have. All in all I am enjoying this series and am looking forward to future books in the series!

Tell me about some of your favorite fictional pets/ animals?