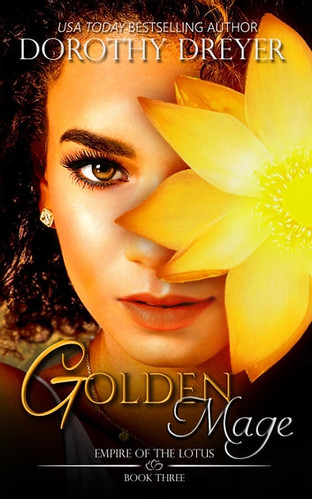 Golden Mage (Empire of the Lotus #3)
by Dorothy Dreyer

Blurb:
Haunted by evil. Bound by prophecy. Driven by faith.

Consumed by his doomed love for the empress Lakshmi, Kashmeru will stop at nothing to break the spell that has kept him locked in a hidden tomb. With the comet Akutake fast approaching, the clock is ticking for the elite mages to gather and fight Kashmeru’s shadow army and the mysterious and powerful dark mages.

As Mayhara, Jae, and Shiro race to acquire the arcane daggers before they fall into the wrong hands, Huojin and Salina must face their destinies as golden mages and learn to harness their power to destroy the enemy—before the enemy destroys them first.

I’ve been enjoying this series so far and I was excited to read the third book in this series. Golden Mage continues the story, just like the first two books the pace is fast and every scene adds something and progresses the plot or characters. I liked seeing where the story went and seeing how things progressed in this book.

The mages are looking for the daggers as well as the other elite mages, they also have a mysterious scroll they can’t decipher and this book focused on those three things. Again we have the point of views of Mayhara, Jae and the empress. And in this book we also get the point of view of the elite golden mage and her best friend. There are some interesting developments, some things they achieve and some things they lose. It kept my attention and I was eager to see what would happen next. There is an interesting development at the end and I am eager to see how that plays out in book 4.

It was nice to get the additional point of views of the two golden mages and learn a bit more about them. Character wise this book had some sadder parts as we see how the elite golden mage strains under the pressure. Their Guru also struggles at times after she got injured. There were a few not so smart things that golden mages did that bothered me a bit as usually that doesn’t happen. For the rest of it they’re quite capable and smart in their actions which I liked. It was fun to see Mayhara and Jae get a bit closer in this book and seeing how they work together and have eahc others back. I also liked seeing how the bonds between the mages becomes a bit closer.

To summarize: Another fast paced and exciting read. It’s great to see how the story develops. There are triumphs and loses for the mages in this book and I enjoyed following them and seeing what happened. There’s an interesting development at the end and I am eager to see how that impacts future events. I liked learning more about the golden mages, although it bothered me when they did some not so smart things. Besides that the characters are quite capable, smart and cautious which I like. If you’re looking for a fast paced fantasy series I can definitely recommend this one. I am looking forward t book 4!