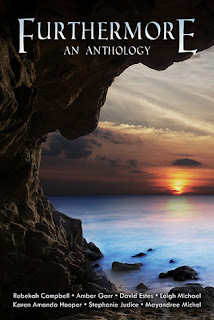 Blurb from Goodreads: A first date, a lottery, treachery and deceit. Sometimes fate has other plans. Sometimes there’s more to tell.

In Furthermore: An Anthology, eighteen original stories take you on a journey through worlds here and beyond. From the depths of the earth to the embrace of the sea, your favorite series continue. Prequels, alternative views, and new scenes give readers a chance to experience more than originally told.

Including stories from Rebekah Campbell, Amber Garr, David Estes, Leigh Michael, Karen Amanda Hooper, Stephanie Judice, and Mayandree Michael. And most importantly, in honor of those who lost the battle and those who continue to fight, all proceeds from this anthology will be donated to cancer research and support.

SURPRISE VISITOR -Emily has never been a fan of surprises but Eric has something up his sleeve to change her mind. (The Darkness Through The Light Series)

GETTING TO KNOW THE HEAVIES – The two Sullivan bodyguards are still human beings underneath it all. And everyone has a weakness. (The Darkness Through The Light Series)

PEOPLE CHANGE – When Eric asks his dad a question about his mother, it’s time to go back to where it all began and then went so badly wrong. (The Darkness Through The Light Series)

COLD FEET – Kain witnesses Eviana’s deceit on their wedding day and is forced to deal with the consequences of her behavior. (The Syrenka Series)

RIFT – Daniel encourages the group to make a detour to the Grand Canyon, as the distance between the friends begins to rival the great ravine. (The Syrenka Series)

DISCOVERY – Leila’s first encounter with her psychic mentor is nothing short of memorable. (The Leila Marx Novels)

HUMAN RESOURCES – Blake finds a new job while Mac finds a friend who reminds him of home. (The Leila Marx Novels)

THE RUNAWAY- TAWNI’S STORY – After learning of her parents’ treachery, Tawni leaves home seeking to make amends for their transgressions. (The Dwellers Saga)

THE LIFE LOTTERY- A STORY FROM YEAR ZERO – With the survival of the human race on the brink, there’s only one way to decide who will be saved in the underground caves: The Lottery. (The Dwellers Saga)

FATE: Experience Annabelle’s struggle to fulfill the ABA Prophecy in a new light through the parting words of Adrian, Aurelia, Blake, and Lady Katherine. (Annabelle’s Story)

THE SOUND OF LOVE – Glimpse into one of Nathaniel’s previous lives and see how his soul mate reacts when tragedy strikes. (The Kindrily Series)

MUIRNE’S MELODY–To escape her master’s vile desires, Muirne flees into the snow-swept night, finding a green-eyed stranger and a mystical destiny. (Saga of the Setti Series)

FALL FROM GRACE: Warped by centuries of darkness, the creature Sveigja plots to capture Clara as his queen. (Saga of the Setti Series)

My Review:
I don’t often read Anthologies. I think the stories are often too short and prefer to read a book and really get into the story. So why did I buy this anthology? Well I heard David Estest has wroten two short stories for this anthology and thought “why not give it a try”?

The first few short stories where written by Rebekah Campbell. The first was a nice short story that was easily read, but the short stories after that were just plain confusing. I haven’t read any of her books and I had no idea what was going on. I just felt like I missed pieces and I think these stories are more enjoyable if you hav actually read her books.

The two short stories after that were written by David Estes, I have read the 3 books in the Dwellers series so far and I love this series. I loved getting to know more about Tawni and Anna. These two short stories already made it worth picking up this anthology.

I actually have to say I don’t remember much of the short stories after that. They didn’t make a lasting impression although I do plan on reading some of the books these authors have written because I am interested in reading more of them.

The last three short stories by Leigh Micheal where short stories I really enjoyed. Even though I haven’t read her series yet, I enjoyed the short stories and enough explanation was given to still understand what was going on. I really am looking forward to read this series and I loved getting introduced to this world and her writing style in this way.

To conclude: while I normally an not a huge fan of anthologies I was surprised at how much I enjoyed it. Some short stories were really confusing, but I enjoyed getting a glimpse of different stories and writing styles and I added quite some books to my to-read list thanks to reading this.

You can find this on Goodreads

You can buy it at:
– Amazon
– Kobo
– Smashwords

Do you often read anthologies? What do you think of them? What are the pro’s and the cons of anthologies?