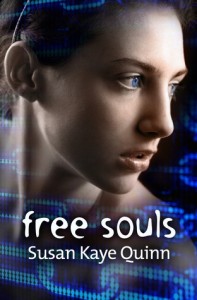 Blurb:
When your mind is a weapon, freedom comes at a price.

The final installment of the Mindjack Trilogy is here!

In the meantime, you may want to check out my Mindjack Origins short stories!

My Review:
I really enjoyed the first two books in this series and I still don’t get why I waited so long to start the third book. It might have somethign to do with the ending of the second book and it might have something to do with having so many books to read that sometimes I just forget about some of them. So I was in this weird reading mood, I wanted to read, but I wanted to make sure it was a book I would enjoy. And then I rememberede this unfinished series and I decided to finally read Free Souls.

Free Souls is by far the best book in this series, it’s so well written and I realized how clever Susan has written this book. The chapters end in such a way you can’t help but read another chapter. There is no dull moments and the story is fast paced and full with action, romance and technology. I loved this book and it made me remember how much I enjoyed the first two books. I really like Susan her writing style and she’s one of my favourite authors. The plot of Free Souls is full with unexpected plot twists, especially the ending. I had no idea how Susan could wrap this up nicely, especially after one of the things that happened towards the end and then wow. The ending is very clever and wraps up things for now, while still being open enough that if she wanted to she could write more books in this series.

While it had been some time since I read the first two books I easily remembered the characters again. Kira is such a great main character and I liked how she could be reckless, but do those things for good reasons. She’s strong and wants to help others and I really liked how she developed towards the end. And then there are Julian, Sasha and Ava, who are great side characters. There are some character developments I didn’t see coming.

The world building is done really well and I liked how much descriptions there where and these specific term for their abilities and how they worked. It really makes the world come alive and I like the futuristic touches. I had forgotten how much I liked this world.

To conclude: I loved Free Souls, it’s such a great ending to this trilogy. I loved how the story took these unexpected twists and turns and I wanted to keep reading and finished most of the book in one setting. This series has great characters and awesome world building.