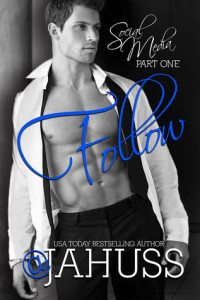 My Review:
Social media and some hot romance? Those two things combined sounded like a great combination, unfortunately I was a bit disappointed by this book. I loved JA Huss her Rook and Ronin series, but haven’t been able to get into any of her books since Guns. Follow was just okay, I expected something else, something different. More social media, less lust, more story and more romance.

Follow is about Grace who goes on a vacation on a tropical island and there meets a movie star, who’s she’s been lusting after for a long time. Well it turns out he’s interested in her as well, but he linkes some kinky stuff in the bedroom and tries to convince her. He was constantly pushing her boundaries, not explaining enough. It just didn’t work for me, there was nothing between them except for the sex and to be honest the sex wasn’t good enough to keep my interest. It was fun to see at first what would happen and I was curious as to how it would all play out, but it was just meh.

With a name like Follow and Social Media as the series name I expected a series heavily focussed on social media and modern technologies. At first there was some attention for it and I actually like the first few chapters where Grace explained about twitter and how she tried making the perfect dirty tweet. But after that there was less focus on social media and I just hoped for more.

Then there are the characters, Asher Vaughn is a movie star and he knows he’ll get what he wants and I just found him annoying and too sure of himself. He never explains things or talks things through with Grace and I don’t know I just didn’t like him. Grace was an interesting character, but I thought she could’ve been more clear about where her boundaries where or push Asher to explain things first before getting in and then deciding she might not want it after all.

The ending was a bit predictable as I knew it was going to end in a cliffhanger and really there are only a few ways to put a cliffhanger ending in a romance book. So yeah I was not surprised and actually kinda liked Grace her behavior at the end, although think she could’ve handled things differently from the beginning.