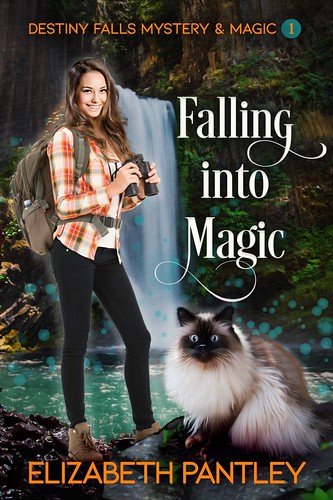 Blurb:
When Hayden was a child, she lost her cat. Adults told her the cat ran away, but she knew the truth. The mirror had taken her. She knew because the mirror had given her a glimpse of an alternate world and had nearly pulled her in, so she was certain the cat had suffered that fate.

Twenty years later Hayden discovers the secret of the mirror when she is thrust into it. She learns of a world she never knew existed, and a family she never knew she had. But danger brought her here, and it followed her. Now, Hayden is on a mission to remove the threat, so that she can begin her magical, meaningful new life in this enchanted world.

When I was asked whether I wanted to review this book it didn’t take me long to decide to say yes, something about that cover and blurb just caught my eye. It sounded like a fun read and I am glad I gave this one a try. Falling Into Magic is a fun story with a bit of magic and a bit of mystery while Hayden finds her way in another world.

I wasn’t quite sure what to expect from this book. And the first few chapters didn’t quite clear that up for me. In fact the start was a bit rough for me, with the sort of two prologues and the different types of point of view (from all knowing to third and then finally to first). Then it seemed to settle into Hayden’s first person perspective. The first chapters show her life back in Seattle, but the story really starts when she arrives into Destiny Falls. And from then onward I really started to get into the story. The writing style did feel a bit off somehow at times, with a few weird instances like the chapter about Leonard and a pov breach early on in a scene, but it got better as the story progressed. I liked the way the author described the surroundings, which was well done and made me able to visualize things well.

Falling Into Magic was a fun read. I enjoyed getting to know Hayden and her cat. I liked seeing her deal with everything that happened and how she had to find her place in this new world. And meeting family that she never knew she had. I liked how Hayden handled it all, although I did keep wondering what happened back in Seattle and whether she could ever tell her friends and family there the truth. I also liked how she was careful most of the time when she knew she was in danger and handled thing smartly. Which is why her actions at the end felt a bit out of characters when she rushes somewhere without backup.

I liked the subtle magic this book had. Destiny Falls has magic, but not the obvious magic fireballs type of magic. It’s more subtle magic with the way the house seems almost sentient and changes and the town and trail change and adapt. It was quite fascinating even tough I don’t feel like I fully understand it, but that just adds to the appeal. It really gave the book an unique touch. I can’t wait to learn more about this place and the magic. There also is a bit about the mirrors and magic, but we don’t learn a lot about those.

The book itself feels like a mix between portal fantasy and a bit of paranormal cozy mystery. The fact that Hayden goes to a whole different world is quite important to the story. The mystery is added later, but then becomes important too. It was a fun blend of genres and I liked discovering this new world and then trying to solve the mystery. I liked how the author wrote the descriptions of the house and nature as it made it easy to visualize how everything looked.

While most of the book is told from the point of view of Hayden, there are a few chapters form other characters. I mostly liked how this was handled as it gave the reader a bit more insight into what was going on. It did remove a bit of the mystery as part of the motivation of the killer was revealed and that allowed me to guess who the killer was. I liked the mystery for the most part and how there were multiple possible suspects. Things did get wrapped up a bit fast at the end with the mystery, but I liked seeing how things got resolved and I liked the last chapter and the glimpse of Hayden’s future.

I liked Hayden as a main character and seeing her find her place and deal with anything in this new world. Her cat also was a great addition. Besides that there is quite the group of side characters, but everyone had their own personality and I was able to remember who everyone was without much effort. There is a hint of romance with two possible love interests for Hayden, but we haven’t seen enough of either of them to really get a feel for their personality and who fits with Hayden.

To summarize: I had a fun time reading this one. I liked the blend of portal fantasy and paranormal cozy mystery. The mystery is a bit of a side plot, but also very important to the story. I struggled a bit with the first few chapters, but once Hayden arrives in Destiny Falls I really got into the story. I liked seeing how Hayden dealt with her new reality, being in a different place and meeting new family. I liked the subtle magic of Destiny falls and it was great to learn more about the place. I liked the way the author wrote descriptions in a way that made me able to visualize everything, The mystery had plenty of suspects, but toward the end things become clearer and I guessed in the right direction of who the killer was due to a hint about the motivation in another point of view. There are plenty of side characters and also a hint of romance with two possible love interests for Hayden. Overall I really enjoyed this book and I look forward to seeing where the series goes next.

2 responses to “Review: Falling Into Magic by Elizabeth Pantley”