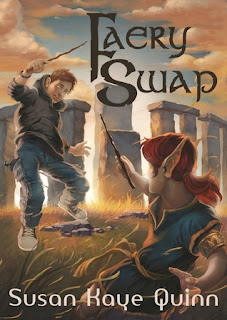 Blurb:
Warrior faery princes can be very stubborn.
Especially when they possess your body.

Fourteen-year-old Finn just wants to keep his little sister out of Child Protective Services—an epic challenge with their parentally-missing-in-action dad moving them to England, near the famous Stonehenge rocks.

Warrior faery Prince Zaneyr just wants to escape his father’s reckless plan to repair the Rift—a catastrophe that ripped the faery realm from Earth 4,000 years ago and set it adrift in an alternate, timeless dimension.

When Zaneyr tricks Finn into swapping places, Finn becomes a bodiless soul stuck in the Otherworld, fighting spriggans with sharp teeth and rival faery Houses. Back on Earth, Zaneyr uses Finn’s body to fight off his father’s seekers and keep the king’s greatest weapon—himself—out of his hands. Between them, they have two souls and only one body… and both worlds to save before the dimensional window between them slams shut.

Faery Swap is an action and druid-magic filled portal fantasy, told by both a runaway faery prince and the boy he’s tricked into taking his place.

This Prince and the Pauper meets Warrior Faeries tale is suitable for all ages.

Faery Swap is a fun and enjoyable story. I don’t read a lot of Middle Grade books, but books like this really make me wonder why I don’t read MG more often. It’s so different from YA and NA, it’s less drama and more epic adventures and a fun story.  Faery Swap is a great story about a human boy and a faery warrior prince who swap places and have to save the world (sort of) and stop the evil guy from carrying out his plans. It’s a bit cliché at some points, but also has some great original touches to it. Like the way magic worked, the importance of knowledge and magic and the Otherworld.