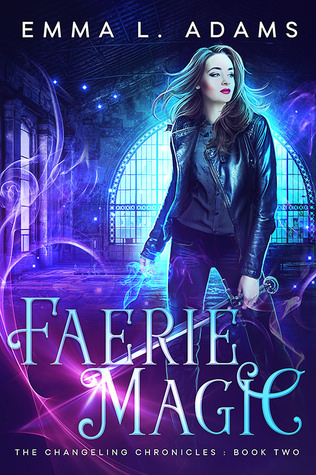 Blurb:
With the sexy and arrogant Mage Lord pressuring me to join his team and a dark movement in the magical underworld threatening to ignite a war between the half-faeries and other supernaturals, I have my work cut out.

Especially when a serum that’s deadly to half-faeries finds its way onto the market, luring in its victims with the promise of immortality.

To find the source of the lies, I have to go undercover to a dangerous magical contest where half-faeries compete for glory. Problem is, to get in, I have to pretend to be one of them.

Navigating my way between half-faeries who want my head on a platter and the Mage Lord who wants, well, me, is tricky enough. But then I learn something about my own magic that changes the playing field. If I don’t come out on top, a second faerie apocalypse is on the horizon.

I really enjoyed the first book in this series and I couldn’t wait to continue the series, luckily I didn’t have to wait long. Faerie Magic is a great sequel. I love how in some ways it’s a direct continuation of the first book when it comes to some plot lines and how it builds upon the basis created in the first book. And in some ways it’s also a new adventure. So it has continuity and each book has it’s own part of the story that sorta gets wrapped up at the end as well plus hint of what the next book will be about.

This one follows the feel of the first book with an abundance of action, magic, sword fighting, faeries and danger. It has a nice pace that makes sure there isn’t a dull moment. In this book there is someone spreading a drug among the half fae and Ivy is determined to figure out what’s going. There’s a big action packed scene at the end, before things get wrapped up and the hint of the next book makes me wish I already had that one. There were a few things that were a bit too similar to the first book, but not too much to really diminish my enjoyment of the book and with the hint of the next book I think it will go into a different direction then. I am getting into the fantasy mood and this book was exactly the type of book I wanted to read.

I would say this book is mostly story focused, but that doesn’t mean there’s no attention for the characters. I really like the characters, most of the focus is on main character Ivy and the two side characters Isabelle who is Ivy her best friend and roommate, and The Mage Lord/ Vance who is the love interest and boss of the mages in this city. And their pixie Erwin is a fun addition, other side character fill in the spaces, but they don’t get as much attention as the others.

Ivy has been gone through a lot and she has trouble trusting people, but since the last book you do notice a change in that. She’s still find it hard to trust people and to tell them everything, but I thought she did a lot better in this book by not waiting till the last moment to tell others about what was going on. She still kept her secrets, but also got better at revealing them when necessary. I thought it was well done and I liked seeing how her character changed due to the events of the last book and what happens in this one. She also comes to terms with her magic more and starts training to use it. I really liked seeing her character develop.

And then there is the romance, it stays on the sidelines, but I am a big fan of how the romance is handled. Ivy is a tad too stubborn and independent at times, but she sure found her match in the Mage Lord/ Vance. He cares about her, has her back and is sometimes a bit bossy and intimidating too. He sure has a powerful presence and I liked how he is a bit mysterious, but also open towards Ivy. I like these two together, at the start of the book I was afraid their relationship was going to revert backwards, with the miscommunication and lies they kept, but it got resolved pretty soon. They still have their banter and they grow even closer in this book, even though they don’t quite come at that stage where I would call them a couple, but they are close. I can’t wait to see how things between them develop in the next book.

We learn more about the world in this book too, bits and pieces we learn here make the world come a bit more alive. Some things might be a tad confusing or don’t fully make sense or get fully explained, but overall I enjoy spending time in this world. There’s a bit more focus on the half fae in this book, so we learn more about those and the different realms. The world building isn’t really outstanding, but it still has original touches and I still like how the author decides to set this series after the faerie apocalypse has taken place and how we still see signs of that now and how it changed the world.

To summarize: the sequel is just as good as the first book. This book is fast paced and doesn’t have a dull moment as Ivy investigates a drug that’s going around among half fae. It’s packed full with action, magic, fights and the half-fae. It’s story driven, but also had a great cast of characters. I like how we see Ivy change and develop in this book. And I really like the touch of romance added to the story. We learn more about the world and it’s interesting setting with how it’s set after the fae apocalypse. All in all I am really enjoying this series so far and am looking forward to book 3!

Do you prefer fast or slow paced books or do you enjoy both?