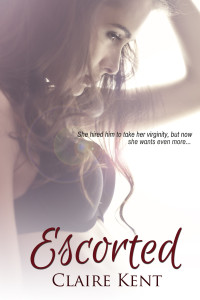 My review:
When I read the blurb for Escorted I thought it sounded like a fun and original story and when i heard about it being on sale for 0.99 i quickly grabbed my copy. Escorted in some ways was exactly how I expected it to be and other ways entirely different. I did enjoy it and kept reading until the end, but there where also some things that bugged me.

Another thing that bugged me was the telling instead of showing in this book. There was a lot of telling and combined with the third perspective it made me feel a bit distanced from the events going on. There was a lot of Lori felt like this, Lori thought this, Lori did this. The pace and writing style seemed a bit off and it was difficult to get into the story, again this all improved greatly in the second half of the book. I really liked the direction the story took in the second half how they fell in love and how they struggled to make something from it. The ending was sweet and I liked how the book ended.

It’s difficult to say a lot about the character because we don’t get to know the character that much, there isn’t a lot of talking or hints at who they are. Again in the second half of the book this does changes and I was able to get some idea of what the values and ideas where of the two main characters. There hardly are any side characters in this book, which felt a bit off. It’s like these characters and their actions are happening away from the rest of the world. The only side character who occasionally popped up was Sabine, Lori’s cousin I think. And she was annoying and kept referring to some movie called Pretty Women, I haven’t seen the movie, but from the references I am assuming it sort of follows the same plot as this book.

I liked how Lori and Ander where able to help and teach each other, while I didn’t really feel their romance, I did think they where good for each other and it was fun to see them grow and struggle with how to define and continue their relationship.

To conclude: this was an enjoyable book with an interesting plot, but I also had some issues with it. There was a lot of sex in this book and the plot seemed to completely disappear at times. I also thought the sex scenes got a bit repetitive after a while. The second half of the book was a lot better then the first half though and added some depth. The telling instead of showing and the third person perspective made me feel a bit distanced from the plot and I had difficulties getting to know the characters at first. The ending was nice and sweet though and I liked how the story ended.

You can add Escorted to your to-read list on Goodreads