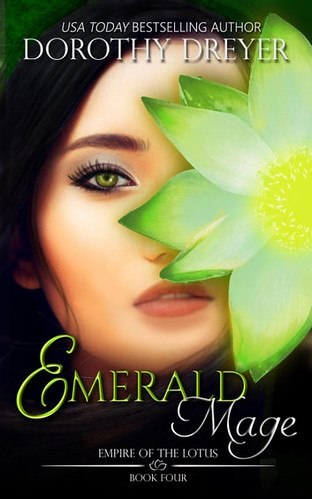 Emerald Mage (Empire of the Lotus #4)
by Dorothy Dreyer

Blurb:
A foreboding prophecy. A lost empress. And a battle to determine the fate of the world.

In the arduous war against the dark god Kashmeru, the elite mages have managed to track down half of the magical daggers. But the enemy isn’t far behind.

Leading the shadow army, the dark mages have won battles of their own, and the Lotus empress is still under Kashmeru’s control. But mysteries are unraveling that could help the elite mages gain an advantage—if they can survive long enough to fulfill their legacies.

I didn’t feel like reading my next review copy yet, so I decided to fit in another book in this series in between. I like this series so far with the short fast paced reads and I flew through this one as well. Emerald Mage focuses a bit more on the characters and some of the relationships that go well or not so well. They’re also planning this big thing where they’ll try and steal the daggers the enemy has in their possession. There is some progress on the scroll they have as well. This one ends on a cliffhanger and it makes me curious to read the next one.

At the end of Golden Mage the main group of mages that the story followed so far catch up with another group of mages, so now they have all the elite mages together. The start of this book was getting to know all the new mages, but luckily the author gave them all different personalities and within a few chapters I had a good feel for who was who. I liked getting to see a bit of the new mages their powers. It’s fun to read about.

I liked seeing the plot point progress, with the scroll and another dagger they go after. And then culminate in their big attempt to steal the daggers from the enemy at the end of the book. I was eager to see how it all played out and the cliffhanger ending makes me want to read the next book soon. There’s a bit less action in this book, but there’s still plenty going on.

I liked seeing the more character focused plot lines in this one. I liked seeing how Salina was doing, how Mayhara and Yae’s relationship is progressing, how Shiro deals with things, and then there are the new characters like Loni, Penny, Kamal and Yuki. I was a bit disappointed to see Loni make some less good decisions, but at the same time it did feel realistic and I think it’s interesting seeing how everyone deals differently with the pressure. I liked seeing the new character integrate in the group and in Loni’s case also cause some strive due to her history with some of the other characters.

To summarize: This was another great read in this series. Like the previous books this one is a fast and quick read and enjoyed it. I liked getting to know the 4 new elite mages that join the team and seeing their powers. This book felt a bit more character driven focusing a bit on the new characters and also some interpersonal things that are going on. Plot wise there’s another dagger they go after as well as progress with translating the scroll. And they prepare for a big mission where they try to steal the rest of the daggers from their enemies. All in all another great read and I look forward to the next one!