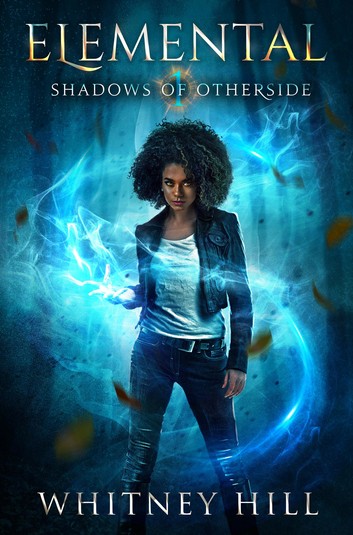 Blurb:
Enter an urban fantasy world where elves, vampires, weres, djinn, and others maintain a precarious balance of power in North Carolina. Welcome to Otherside.

Private investigator and sylph Arden Finch is determined to come out of the shadows and practice her forbidden magic. There’s just one problem: the elves have a bounty on elementals like her.

When an elf hires Arden without realizing what she is, she seizes the chance to gain leverage in the dangerous world of Otherside—even if it means risking exposure. But as the case grows more perilous, Arden draws the attention of the region’s deadliest power players.

Fans of Kim Harrison, Faith Hunter, and the early Anita Blake series will find a kick-ass heroine to love in Arden.

This book is going to be a difficult one to review. I really liked the concept of this book and the first part and then the second part didn’t work for me. The pretty cover and blurb pulled me in and then I had a look at the sample and the writing style clicked with me too. I was pretty sure I was going to enjoy this book. And for a while I did. This book feels like it’s broken up in two parts for me, not literally as the divide isn’t that clear. For me there is the part I enjoyed at first and then once the mystery is solved it somehow turned into a book I didn’t enjoy. And that just makes me sad as the start was so good. And I am not even quite sure what changed so drastically that it soured the whole book for me.

Elemental is about Arden Finch, she’s a private investigator for humans. Secretly she’s also part of the Otherworld, the supernatural community. She’s an elemental, a sylph, who can control wind. Only a few people know what she is though as elementals are hunted by the elves. Arden has kept her powers a secret for a long time, but now that an elf has hired her to solve the mystery of his missing grandma she’s walking a dangerous path.

The story gripped me from the start, I liked how capable Arden was when she gained access to the headquarters of a startup company in a smart way. She seemed good at her job and that was interesting to read about. Slowly we get these hints of things being stirred up. An elf hires her for an unusual job and there is some unrest in the otherworld community. She tries to keep her distance, but slowly gets pulled deeper into it all.

At first it’s mostly reads like a paranormal mystery as Arden tries to solve the mystery of the missing elf. I enjoyed this part, seeing how she dealt with humans and otherworlders alike and also kept her powers a secret. There are some big things she has to deal with and things she have to figure out that relate to her, as well as this mystery that is more than it seems. Once the mystery is solved around midway through the book it got less enjoyable for me.

I felt like Arden got less capable, I thought she handled some things in a not so smart way and I also thought I wasn’t as interesting how she just wanted to be left alone mostly. I felt like she got pulled into multiple directions by other people and what they wanted, it got spun in a way so it also fit what she wanted, but it still felt like other people decided the direction and she just made the most out of it to suit her own needs. And then other times she seemed overly aggressive or angry and while it kinda made sense, I also didn’t quite like it.

There were some plot points that didn’t quite make sense to me, like why she needed leverage to gain her independence as we never knew what Calista had over her or why she wouldn’t let Arden go or what their work relationship really entailed. Only at the end I felt like we got this piece of the puzzle, but as it was such a big part of the plot I would’ve liked that earlier. Then there is the big part of how elves kill elementals on sight. It was such a crucial part of the plot, but we never find out why. Arden kinda comes up with a possible explanation, that to me didn’t make sense as the elves their power seemed way more creepy, but we never got the explanation from the elves.

It also felt at times that the plot and the main feel of the story changed directions. At first is a mystery with more going on then it seems to be more about the different otherworld factions and by the end there is this whole new level that gets added. The last one didn’t even have any build-up and it felt like that plot point came out of nowhere. The same with some side characters, there are some introduced early on or important for part that we don’t see later on and I wanted to know what happened to them by the end of the book. While part of the plot gets wrapped up, it also is clearly a first book in the series in the sense how bigger plot lines are left open, so some of my questions might be answered later.

There are some interesting side characters, but none that I would really say are likable. Everyone has their own agenda and most are quite selfish. This gives a certain vibe to the world and interactions and it didn’t quite work for me or fit with what I had expected of the book. I think there is one person that helps her and discloses information out of the goodness of her heart instead of bargaining for it. I just would like to read more about nice people nowadays.

There is a hint of possible romance and Arden has a agreement with a werewolf that she works and sleeps with, but they aren’t dating. I quite liked their relationship at first and the way they interacted, there are no strings attached and they both seemed happy with the arrangement. I liked how caring he seemed. Although later in the book their relationship seemed to get soured a bit due to some plot developments. I can totally understand his motive, but I also was a bit sad he seemed to have his own goals as well now.

I mostly liked the world building, the general idea of this otherworld communicate hidden in plain sight from the humans. It was nice to see how every type of supernatural had a bit of their own community and their own skills and powers. And it feels like there are even more than we see so far. Although there were some specific details I wanted to know more of or that didn’t quite make sense to me.

I am not even sure what my main issue with this book was. It just felt like I was enjoying the book and then slowly multiple things started bothering and by the end I was happy I finished reading so I could start a new book. It’s like a lot of small things, plot related, character related and so forth that just started not workign for me and then adding up.

To summarize: This book had a great start with a capable main character, a tricky mystery and some fun paranormal elements. I really enjoyed the first part of the book when Arden tries to solve the mystery, after that I slowly lost interest. It’s a multitude of different small things that didn’t quite work for me. From the plot and vibe going into a direction I didn’t really like, to the main character becoming less capable and being pulled into directions by others, side characters that seemed mostly focused on their own gain and some big plot elements that didn’t quite make sense. Unfortunately by the time I finished the book I was happy it was over. There are some parts and scenes I did really like, but the second part of the book kinda ruined the book for me. It has an unique twist on the magical/ paranormal world that I like and I enjoyed seeing and learning more of the different paranormal species.