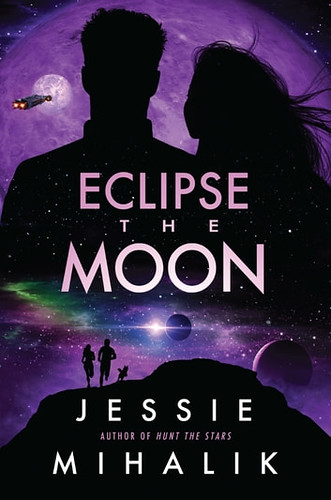 Blurb:
Kee Ildez has been many things: hacker, soldier, bounty hunter. She never expected to be a hero, but when a shadowy group of traitors starts trying to goad the galaxy’s two superpowers into instigating an interstellar war, Kee throws herself into the search to find out who is responsible—and stop them.

Digging up hidden information is her job, so hunting traitors should be a piece of cake, but the primary suspect spent years in the military, and someone powerful is still covering his tracks. Disrupting their plans will require the help of her entire team, including Varro Runkow, a Valovian weapons expert who makes her pulse race.

Quiet, grumpy, and incredibly handsome, Varro watches her with hot eyes but ignores all of her flirting, so Kee silently vows to keep her feelings strictly platonic. But that vow will be put to the test when she and Varro are forced to leave the safety of their ship and venture into enemy territory alone.

Cut off from the rest of their team, they must figure out how to work together—and fast—because a single misstep will cost thousands of lives.

I really enjoyed Hunt the Stars, the first book in this series, and couldn’t wait to start the second book in the series. Eclipse the Moon follows the same crew and continues the story, but with a different couple. I thought this worked well as the main plot line continues, but we get the focus on different characters and a new romance.

Eclipse the Moon follows the point of view Kee, she’s such an interesting character and I liked reading about her. She’s super handy with technology and can dig up information and get access to everything. I like how she’s has a softer side, but also is much tougher than most people think. I liked her determination and spirit and I had a lot of fun reading about her.

Plot wise I thought the book started a bit slow and I struggled a bit to get into it due to that. There isn’t a lot happening and everything that Kee tries to find out more information is not leading too much. It just kinda felt like nothing much was happening and I was just waiting till things would start as there are definitely hints that something is up. Then a certain event kick starts the whole plot and after that it was almost nonstop things happening. The pacing felt kinda off due to that, with the first part having too much quiet moments and not enough plot where in the later part I sometimes missed the quiet moments and developing romance as there was so much happening.

I liked seeing the crew of Starlight’s Shadow from Kee’s point of view and seeing more of them. Although the crew isn’t as present as in the first book as a there is a lot of time with Kee being away form them. But we do meet some new interesting characters. I also feel that the space apart from her crew gave Kee the chance to really shine, so that was nice.

I liked the new side characters we meet in this book, there are some interesting characters and I liked how they fit into the plot. I liked seeing the plot continue and it’s very much a continuation of the main plot from book 1, which was interesting. While they make progress in this book with the story, the main plot isn’t resolved yet as that will likely happen in the next book(s).

I liked the romance, Kee and Varro are kinda opposites but they are quite similar in ways too and make for a great couple. Varro is quiet and grumpy and Kee has a giant crush on him, but she thinks he doesn’t feel the same. When they end up on a mission together they slowly figure things out. I liked their romance, although it did feel like the focus kinda shifted.

The first part of the story was quite slow plot wise with more focus on the character interactions and their romance, while later on there is more action and the romance kinda fades to the background. I did like seeing how well they worked together and have eahc other’s back. One thing that did bother me was the way some of the conflict or issues keeping the couple apart are the same as in the first book and have to do with the Valoffs vows and honor system. I really like how the Valoff culture comes alive and I feel that it’s interesting to see that, but it just kinda felt a bit too similar to the romance conflict in book 1 even though the resolution is different.

To summarize: This was a great sequel! The start of this one is a bit slow, but after a certain event it becomes a lot faster paced with more going on and some difficult situations Kee and the rest land in. This book has less of the main crew of Starlight’s Shadow and more new side characters, which worked here even though I would’ve liked to see more of the crew. There are still some great scenes with the crew and I liked the new characters. The plot is a continuation of book 1’s plot and progresses here, but things don’t get resolved yet. This book follows Kee’s point of view and her romance with Varro. I liked her personality with the way she has a softer side, but she’s also though and determined. I liked how handy she was with tech and how this book focuses more on that than action. I liked her romance with Varro, but would’ve liked to see more of them together. It also bothered me a bit that part of what kept them apart was similar to what kept the couple apart in book 1. I am already looking forward to the next book in this series!

One response to “Review: Eclipse the Moon by Jessie Mihalik”