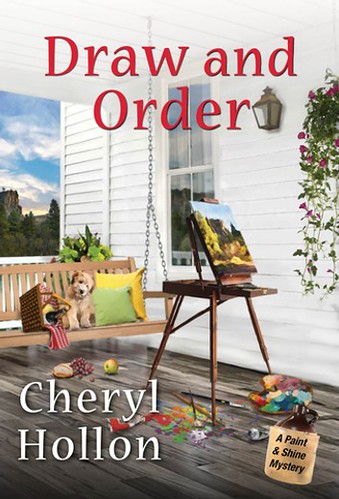 Blurb:
Appalachian artist and local guide Miranda Trent opens a new murder investigation after her Paint & Shine tour group discovers the remains of a missing hiker along an ancient trail…

For her latest excursion, Miranda is thrilled to take a close-knit group of rock climbers, the Risky Business Adventurers, up the challenging Battleship Rock Trail to paint and sample moonshine. But the outing is cut short when they discover a skeleton near the trailhead. Even more startling, the bones belong to Howard Cable, Miranda’s cousin…and a former classmate of the Risky Business group.

The sheriff chalks it up to a hiking accident, but Miranda isn’t convinced that Howard, an experienced woodsman, died within sight of a well-marked trail. So, with the help of Ranger Austin Morgan, Miranda sets out on her own investigation and discovers that the Risky Business group is keeping plenty of secrets. But is one of them hiding the truth about Howard’s death?

After enjoying book 1 in this series I was excited to pick up book 2. I thought Draw and Order was a great sequel. Main character Miranda is a bit further in her new business and is now working to get her distillery all set up so she can start brewing moonshine, but things keep going wrong. During one of her tours they stumble upon the bones of a dead body who turns out to be Miranda’s cousin, so she gets involved into another mystery.

The mystery is a bit slow to start, with them first having to find the bones and figure out who it belongs to. Then the sheriff isn’t convinced they need to investigate and Miranda’s aunt asks Miranda to solve the mystery. The suspicions fall on the members of his hiking group and Miranda and her friend Austin start investigating them. One by one they look into these characters lives and multiple secrets come to light. The mystery kept me guessing as I wasn’t sure who had done it, I was thinking in the right direction for the motive. I felt the ending was a bit anti climactic as another characters figures out the murderer due to insider knowledge the main characters don’t have. I also wasn’t a fan of how Miranda got involved in the mystery because her aunt asked her too, instead of deciding so herself.

Despite my minor complaints about the mystery I had a great time reading this one. I enjoyed this book and following Miranda along. I liked reading about her fledgling business and how she handles the obstacles on her way. It also has a very realistic vibe with things going wrong and Miranda struggling with relatable things. I like the setting and reading about the scenery and hiking trails. Another thing I like about this author’s books is how each chapter starts with the day of the week, time of the day and location, this makes it easy to place where and when this is taking place.

I like following Miranda’s point of view as she gets invested in solving this mystery. I also liked seeing her friendship with Austin deepen in this book. I liked how we see more of the sheriff and his wife the coroner as well. There’s even a chapter from their point of view. Then there are a bunch of new characters as well. I am still not sure what to think of Miranda’s moms and Ron’s role in this story as I had a hard time figuring out what Miranda thought of them. I wasn’t sure whether she was just being nice or whether she preferred if they weren’t there. In some scenes she seems to appreciate their help and in others it feels like she wish they would leave. It just left me confused and the ending leaves open what happens next.

To summarize: this was a solid sequel. The mystery kept me guessing, although by the end unfortunately it gets solved by a side character. There are plenty of secrets that come to light along the way. I liked reading about Miranda’s life and her business and see her relationship with Austin deepen. The setting is great too and I like how realistic the story feels. It’s nice to see more of familiar characters and meet some new ones. I am not sure what to think of Miranda’s mom and Ron, but we’ll see what comes of them in the next book. I look forward to seeing how Miranda and her business progress over the course of the series.

4 responses to “Review: Draw and Order by Cheryl Hollon”