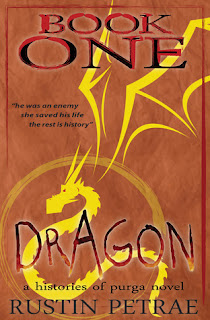 Blurb from Goodreads: He was an enemy.

She saved his life.

The rest is history.

Rooks have embraced science and technology, even inventing helpful, microscopic, robots called nanos to create nearly any machine they want to meet their needs.

The Terraquois are their opposite. They have embraced the spiritual and have a deep bond with nature. It is this bond that allows them to transform into the animal that resembles their own, inner selves.

These two races have fought each, often with brutal savagery, for centuries. But things change when the Rook prince, Rone Varlamagne, is shot out of the sky and left for dead in the desert by an unknown force. Keiara, the daughter of the Terraquois chieftan, is the one to find him but instead of killing him, she decides to save his life. It is one act. One conscious choice, but it changes everything for them and the entire face of Purga.

Together, they face foes from every direction…and they will stop at nothing to protect each other.

My review:
I really enjoyed reading this book, although I did have some issues with it. Mainly it is a very enjoyable story with a nice idea, but some of it could’ve been done better.

The story is really interesting and enjoyable. I liked the idea of having two groups of people live next to each other that are so different and are always in war. Although contrary to what the blurb suggest this book is not much about war. The blurb made me expect a very different book, with more epic battles and undying love and such, but both the love story and the battles take less time of the story than I expected.

This book is told from multiple point of views and I liked getting to know more than one character. Again from the blurb you may gather that the story is told from both characters perspectives, but we actually get to see more than their point of views. I did thought the perspective was done a bit strange, because sometime when reading from a certain point of view some comments were thrown in about another characters thought or about something the character didn’t know, It was just a bit strange and I would’ve preferred to only know things from the person who’s pov it was.

The characters were really likeable characters and because we get to see multiple point of view, you get a better idea of who everyone is. While I liked the characters I would’ve liked feeling more of their emotions. Their emotions were described, but I couldn’t really feel them.

There were some parts of the story that were a bit predictable and a few parts that didn’t make much sense to me. Also some characters made decisions a bit too fast and didn’t really seem to think about things. Some things were a bit too easy. And at the end there are still many loose ends, but I guess the reason for that is to make readers curious for the next book. Still I would’ve preferred for the ending to be a bit different, because now the ending was a bit sudden and left many loose ends.

I really liked the world and there certainly was attention for world building, many small things are explained and we do get a sense of how things work in this world. Although I still think there are some huge gaps, like why the two species are in war with each other and why they developed so differently, but also some small things like why a certain injury could be healed and others not. I just had the feeling there was more to the world and what we got to see was interesting that I wanted to know more.

To conclude: an interesting and enjoyable story. It is told from multiple point of views, but sometimes there were a few sentences from another pov thrown in the middle of a paragraph. I really liked the characters, but I didn’t really feel their emotions. I also would’ve preferred to get more world building, but I liked what we learned about the world.

6 responses to “Review: Dragon (Histories of Purga #1) by Rustin Petrae”