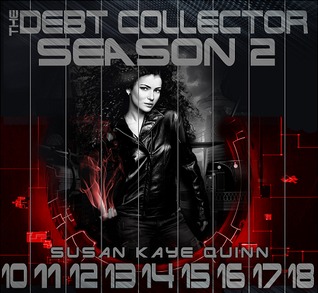 Blurb:
Urban Fantasy with a Cyberpunk Twist
***Second Season of Debt Collector***
Recommended: start with Season One.
*pre-order of the full season available

What’s your life worth on the open market?
In this gritty urban fantasy, debt collectors take your life energy and give it to someone more “worthy”… all while paying the price with black marks on their souls.

“Wraith is amazing and just as compelling as Lirium—once again I’m hooked!!”
“I loved being back in this world! Wraith has captivated me.”

The nine episodes of Season Two of the Debt Collector serial are collectively 125k words or about 500 pages.

My Review:
I received copies of the individual episodes in exchange for an honest review. As I read all episodes, I wanted to review the season as a whole.

I read both season 1 and 2 episode by episode and I just have to say that Susan can really pull of the episodic format. Each episode has enough story, lots of things happening and best of all no cliffhanger endings. The story is fast paced, with lots of story and events happening. Beside that there’s a great world and interesting characters. I would recommend the Debt Collector series to everyone who loves a good sci-fi/ urban fantasy series.

Season 2 has a different main character then season 2, while that might sound weird, it totally worked. I loved Wraith as a main character as much as Lirium of season 1. Wraith was a great character and it’s amazing to see how much she grows throughout the season, she learns so much about herself and other people and I loved who she became at the end. She has to do a lot of difficult and hard things, but she does them for the right reasons and at the end she has what she needs to fight back and she does. Just like Lirium she might be an anti-hero, but she has her heart in the right place and she does things for good reasons. She is a complex and interesting character and I enjoyed reading about her this season.

The side characters are interesting as well, although some really had me doubting about their loyalty for a long time. It’s often unclear who’s on Wraith her side and who not and it really kept me guessing up till the last episode concerning some characters. And with most characters it’s not black and white, they have their motives and sometimes they don’t have a choice or they actually do things for the right reasons even if they are bad things. It makes for complex and interesting characters.

There is some romance in this season and some sex, but it’s not the focus of the story at all. It’s more like a side plot that advances a little bit in every episode. There are two potential love interests and it even get’s to a point were it feels a bit like a love triangle and while for one of the love interest there isn’t really a happy ending I did like how it all worked out. It didn’t feel like Wraith had to choice, it just worked out.

There are some cameo appearances of Lirium in this season and it was fun to see him again and how his story tied into Wraith’s story. There was even a side characters from season 1 that played a part here again and I think he might be even more important in later seasons. Parts of Lirium and Wraith their stories have some similarities, both are anti-hero character and both learn some of the same things and land in a similar situation. But while there are some parallels, season 2 still adds new things and is a fresh story while also building on the overarching story.

Season 2 adds a lot in terms of world building and I love how everything from season 1 ties in with this one and while you can read them as standalone I would recommend starting with season 1. This season again shows how dark the world is and the life energy trade and the unfair things that happen. It’s also all about the same organization who’s doing bad things and in this season it feels like we get a part of the bigger picture, things make more sense and fall in their place.

At the end of season 2 is a great ending, it wraps things up and ties up most of the lose threads surrounding Wraith, but it also leaves enough room for future seasons and some plot lines which are part of the bigger plot still remain. Some problems get solved, but it’s more the small things, the bigger things are left till the end of the series.

To conclude: I loved season 2 of Debt Collector! It has a different main character than season 1, but I really enjoyed Wraith as a main character. It furthers the plot from the first season, while also introducing some new issues. I really like how these seasons tie into each other, while still feeling a bit separate at well. Susan does the episodic format really well and this is a great series! can’t wait for the next season!