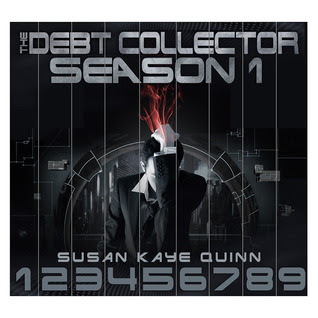 Blurb from Goodreads of episode one:
What’s your life worth on the open market?
A debt collector can tell you precisely.
Season One now complete!

My Review:
Before starting with this serial, I never had read a serial before. Basically it is a series released in episodes (short book from around 50 pages). While I read this serial episode by episode, after the release of the last episode it is now bundled in one book, so you can read it like a normal book too.

This story takes the readers to a dark and grtty world where there are people called Debt Collectors who collect life energy from people who have too much debt and give this to so-called high potentials. The story is original and unique and from the first episode sucked me into the story. There also is a lot of action and the story is fast paced and kept me wanting to read more and eager for the next episode. The story takes some unexpecting turns and sometimes I had no idea how Lirium, the main character, would get out of the mess he got into.

Beside the story the characters are another thing I love about this serial. Especially Lirium, he is such a great character. He tries to be a good guy, but with a job being a Debt Collector that isn’t easy. Still he really tries and I kept seeing the goodness inside him, I love the fact that he is such a good character despite his situation. There are also some great side characters like Apple Girl, Ophelia and Valec.

Most of the world building is done in episode 1 already, but there is built onto this in every episode. Every episode adds another bit of information to this world and it feels more real with each episode. Although I still think there could’ve been more world building. I didn’t get to know all I wanted to know about the world, but there is enough to get a good sense of the world. I still want to know how the world became this way and how the world as we know it developed into the world in this book. I loved getting to know this dark and gritty world which still has some good characters inside it.

To conclude: this is an awesome series, which I would like to recommend to everyone. Episode 1 is free so why not try and see if you like it. It has a great story, fast paced and original. The direction of the story surprised me more than once. I love the characters, especially Lirium. There is enough world building, but I still woudl’ve liked getting to know more about the world, especially about how the world turned out this way. The ending all wraps it up nicely while still leaving room for your own imagination.