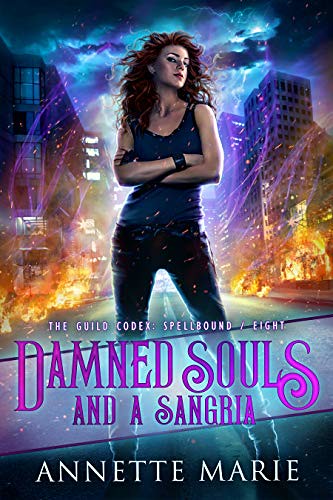 Damned Souls and a Sangria (The Guild Codex: Spellbound #8)
by Annette Marie

Blurb:
Once upon a time, I was your average spunky redhead with the lamest employment history ever, a shaky relationship with my only family member, and no idea what I was doing with my life.

Now, I’m a pseudo mythic with the best bartending job in the world, the most amazing (and hot) best friends I never knew I needed, and a guild of misfit magic-users who’ve become my extended family.

And I’m about to lose it all.

In my desperation to save Ezra, I stumbled into a web of ruthless deception—and seriously pissed off a sleeping hydra. Now its every murderous head is turned toward me and my guild, and I don’t know how to stop it. I’m not sure I can.

I’m not sure anyone can.

But if we don’t, we’re all doomed—Ezra, Aaron, Kai, and my beloved guild.

Damned Souls and a Sangria is the 8th and last book in the Spellbound series which is just one of the series set in The Guild Codex world. This is the first series I finished by this author so I wasn’t sure what to expect of a series ender by this author. I was excited and a little bit reluctant to dive in as it’s both great and sad to see this series end. I thought this was a great ending to the series. There were high stakes, plenty of action and danger as well as some really happy and uplifting scenes and some sad ones.

There’s a lot going on this book. After the big discovery of the previous book Tori’s guild is preparing for a big fight. Not only that, but time is running out to save Ezra’s life. This is a high stakes read for sure and it was an action packed finale of this series. There wasn’t a dull moment in this book and I enjoyed following all the characters along and seeing how they dealt with everything in this book.

The pacing and build-up felt a bit differently than previous books in the series. It already starts right in the middle of things, instead of the slower build up that the previous books had. While it starts right in the middle of things, it still builds up even more to a big epic battle at the end of the book. It almost was a bit too epic, with how big it was, but it also really worked and it fit the high stakes of the series and this book. It sure make for a spectacular show down at the end. There aren’t as many investigations and big reveals as in the previous books, but there were still some unexpected twists and turns. Mostly character based surprises and seeing how certain plot lines get resolved. And a whole plot line I hadn’t expected, but which I think will be more explained/ important in another series.

I was really excited to see how some of the plot lines got wrapped up. All the events had the appropriate weight and the sense of danger was clear throughout the whole book. The happy scenes felt even happier due to everything they had to go through to get there. There are ups and downs throughout the book and then there’s the big dangerous battle at the end followed by the epilogue, which was just awesome. It was so great to see how everything got wrapped up at the end.

There are a few pieces that aren’t fully wrapped up as this series is only one of multiple ones set in this universe. I thought the author did a great job making this book feel like a series ender, while at the same time leaving enough bits open and questions unanswered to make me even more curious to read more of the other series set in this world. I love seeing how intertwined all these series have become, but it really is the best if you read these in the order in which they published. I liked seeing Tori and Robin work together in this one. As well as seeing Kit and Liena pop up.

To summarize: this was an awesome high stakes action packed finale to this series. It starts right off in the middle of things with high stakes and continues that way for most of the book ending with a big shown down at the end as well as an awesome epilogue. I really liked seeing the big plot lines and questions wrapped up in in this book. While I would’ve liked seeing a bit more of the long term results of things, the epilogue did a good job of still giving us that taste of what their future will look like. It was a great read with ups and downs, as well as plenty of danger and action. It really was a great ending to this series and I really enjoyed it. A few questions and plot lines are left open as there are more series set in this world, but that makes me even more excited to read more of those. All in all this was an awesome ending to this series and I can’t wait for the next finale to the Demonized series!

4 responses to “Review: Damned Souls and a Sangria by Annette Marie”