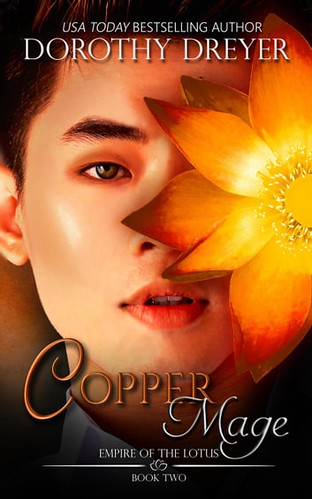 Copper Mage (Empire of the Lotus #2)
by Dorothy Dreyer

The soldiers of the shadow army are on the rise. The ancient deity Kashmeru has the Lotus empress under his control. It’s up to the elite mages of the Empire of the Lotus to put an end to the dark god’s course of death and destruction.

But mage powers have been outlawed, and not all mages are free. As Mayhara evades the Imperial Police on her quest to gather the elite mages, Shiro must do what is necessary to escape the prison camp he’s been trapped in for years.

The collapse of the universe is at hand, and the pieces of the puzzle must be put together before it’s too late.

After I finished reading the first book in this series I bought the box set so I could continue this series. When I was in the mood for a fast paced fantasy book I picked up Copper Mage. Copper Mage has the same fast paced exciting vibe as the first book. The story is well paced with not a dull moment and it makes for a great read.

I think I enjoyed this one even more than the first book. Now that we are introduced to the world characters and their quest the story moves even smoother. I enjoyed following Mayhara and Jae as they try to find the other elite mages as well as the daggers. They also have the help of their guru who serves a bit of a leader for the group. I liked how the plot progresses and I like this type of plot where they have to find a certain amount of people/ items. They make some good progress in this book and there are some interesting developments as well as some nice action scenes. I liked seeing more of the different mage powers and getting a better understanding of what some of the mages could do and what the different types of magic are like.

In this book it switched to multiple point of view, which worked well. We get to meet the copper mage and follow his point of view till he meets up with the rest. I liked how the different perspectives gave us additional insight into other characters, while still having plenty of Mayhara’s point of view as well. There are some chapters form the point of view of the Lotus Empress as well, which are always pretty short, but do give some good insight into her situation as well as what the enemy is up to.

To summarize: This was a great sequel, it’s a fast paced entertaining read with not a dull moment. I enjoyed this sequel and seeing how the plot progressed. The characters are searing for the other elite mages and the daggers and I liked seeing how they handled this. There are some well done action scenes too and I liked seeing more of the mage powers. The multiple points of view worked well here and helped to give some insight in other characters. I enjoyed this book and look forward to the next one!