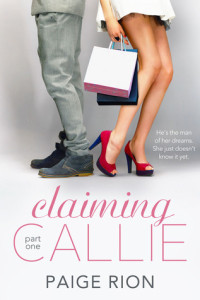 Blurb:
Her love of Michael Kors might be her downfall.

Callie Cartwright is a college senior on the verge of graduating and getting the job of her dreams. But her illustrious shopping habit and expensive tastes backfire when her future employer gives her an ultimatum. She has less than six months to lower her debt or she’ll lose the job she’s worked so hard for.

His secret crush may be his undoing.

Dean Michaels has everything going for him. He’s a manager at the local coffee shop, a sophomore in college, star of the university basketball team, and don’t forget, gorgeous. The only thing he needs is the girl of his dreams to make his world complete. And he’s finally ready to go after her. The only problem: it’s his sister’s best friend he’s crushing on. And all she sees in him is the love for a brother.

When Callie concocts a crazy plan as a way to make quick money and pay down her debt, Dean’s feelings go into overdrive. It’s time to show her how he feels.

And the plan he proposes, just might be the one to finally catch the girl.

*Claiming Callie is part one of a series of four serial novellas and is approximately 28,000 words in length (about half the length of a full novel).*

While I liked the blurb for Claiming Callie, this book wasn’t the book for me. I did finish it because it was so short, but I just couldn’t enjoy it. Callie is so naive and frankly she makes some really stupid mistakes and I just couln’t understand how she could buy even more clothes when she was trying to pay of her debt and then didn’t even seem to feel quilty afterwards. I couldn’t connect with Callie at all and she was difficult to like as she amde her own problems and then thought up weird plkans to fix them which where doomed from the start. The onyl one who seemed to think her plan was weird was Dean, but beside that there wasn’t much to like about him either. Okay so he had a secret crush on Callie, but when he finally does somethign about it, it is a plan so weird I just wanted to shake some sense in him.

This book read more like a weird comic, then a romance. I didn’t fele the romance and some situations where so weird that I couldn’t believe anyone would actually act like that or say that. And while this should be a New Adult book the settign felt more high school to me, or maybe there’s a big different to universities where I live and in the USA that’s possible too.

To conclude: while the blurb sounded fun, Claiming Callie wasn’t a book for me. The story fell flat to me and I found most situations feel fake or unbelieveable. I couldn’t connect with the characters and didn’t feel the romance.

You can find Claiming Callie on Goodreads