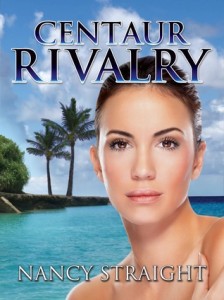 I started Centaur Rivalry right after Centair Legacy, so while this time I didn’t need any of the recap, this book again managed to have just the right amount o recap. Enough to remember for those who forgot a bit from the last book and not too much so it get’s annoying for those who just finished the last week. While I loved the first two books in this series this book had a bit of a middle book syndrome feel. There are some important events that happens and characters and such that get to the right place before the fourth book, but it just felt a bit of a build-up for the next book.

The pace felt a bit slower then in the previous books and some descisions didn’t make that much sense to me, I was really happy with the descision made at the end as I felt like that was the descision they should’ve been making all along. There where some subplots in this and some point of view of side characters that added something extra, just like in the previous books. And at the end all there’s left in the confrontation in the fourth book and I am really curious to see how that will al play out.

There are some new characters introduced in this book and while I liked them, it was all to easy to see form the start who’s love interests they would be. I liked Daniel a bit less in this book then in the previous ones, there seemed to be a bit too much focus on the love triangle issues, while obviously there is no real love triangle. The scene in Las Vegas felt a bit off to me as i didn’t get their reason for going there in the first place and then how Daniel acted there was unnessecary in my opinion. I did like Brent’s dillemma in this book, but I would’ve liked to actually see his point of view as I didn’t really care for him like I did for Beau in the second book. I was also sad that we didn’t got any scenes from Beau’s pov as his story seemed to be resolved mostly. I did like Katherine and she was a nice and interestign character, I also liked the few chapters from her point of view and I felt like we got a good idea of who she was, while I found Jessica more difficult to connect to. And for some reason i kept forgetting who was who at first.

While I liked Cami and Drake together they just didn’t seem that interesting as in the first two books and I hope to see a bit more of Cami her iner strenght again int he fourth book. There also wasn’t much focus on her powers or anything in this book. I also thought Drake’s attitude in the first part of the book was a bit annoying. And while this should’ve been the most romantic book for them so far, I didn’t really feel it.

There is some extra background and world building added in this book and I thought there was a nice twists involvinv Katherine and her background. It was fun to see this added detail and some things made a little more sense now. I would’ve liked to see a bit more from the gods as while there is hinted at their involvement, we don’t see much of their involvement in this book, while there was some in the second book. I wonder what their actions will be in the next book.

To conclude: while still an enjoyable story, this book felt a bit like a build-up to the next book. We are introduced to some new characters and some important events happen, but the pace seemed a bit slower then in the previous books. I did like Katherine, a new character in this book, but felt like some of the other characters acted a bit off sometimes. All in all it was still an enjoyable read and I am looking forward to the last book in this series!