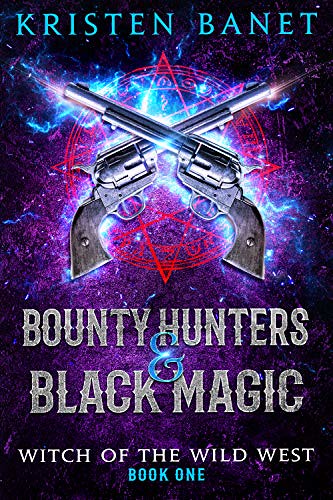 Blurb:
What kind of trouble can a witch get into when she lives in the only supernatural town in the Wild West?
A lot.

Meet Adalyn Lovett, the local and only witch of Redstone and a bone to pick with anyone who wants to cause problems for her supernatural home. After losing the town sheriff to a demon attack the year before, she’s taken the task of protecting Redstone on herself. The idea? If any demon outlaws roll through, she’ll have the magic and skill to banish them, protecting everyone. She just needs to test the spell, a little piece of illegal black magic she shouldn’t even have. Not too hard. Just banish a demon with it.

Things seem to be going as planned until they don’t. Adalyn has brought all manner of things home with her without even knowing. Demons, bounty hunters, and an aggravating, warlock US Marshal who thinks he knows best.

Adalyn’s got a bit of a mess to clean up.
A sexy mess, but a mess nonetheless.

Witch of the Wild West is a steamy fast burn RH paranormal romance series set in the Wild West! From hellhounds to warlocks, and everything in between, jump into Adalyn’s wild world and join her in following her wild heart. Expect fun adventures, hot scenes, and a feisty female lead who won’t let anyone tell her what to do and won’t choose between the men she falls in love with. It’s all or nothing in the Wild West!

I really liked the concept for this book: a reverse harem paranormal romance set in the wild west. That just sounded like an awesome set-up for the story. So it makes me sad that unfortunately this book didn’t really do it for me. While a decent enough read I kept waiting for something to really pull me in the story or make me care about the characters and what was happening, but that never happened. It was entertaining enough that I managed to finish it, but this one is a bit between a 2 and 3 star rating for me.

The setting is fun, although not explored as much as I would like. The paranormal aspect was interesting enough, I liked the wide variety of species and how we saw a bit of them, but again very little world building beyond that. I never fully warmed up to the characters. And where I expected romance there was just some lust and sex and it never progresses beyond that. There were multiple little things in the story and writing style wise that didn’t fully work. And all those little things just added up.

Bounty Hunters and Black Magic is mostly told from the point of view of Adalyn. She lost her husband a year ago in a demon attack and now she’s determined to be better prepared in case that happens again. She has just spend a year in mourning and preparing. The story starts off when she’s testing a black magic spell she learned. Shortly after that she returns home with a group of demons on her tail who aren’t too happy she banished one of their own. Two bounty hunters arrive in town wanting to collect the bounties on the demons. And Adalyn is horny as hell as determined to find someone to lay with now that her year in mourning is over. And that’s basically the set-up for the story.

While the book has a good balance between plot and the “romance” plot line, the plot moves quite slowly and not a lot of big things happen in this book. The plot never fully gripped my attention and I felt like I was missing part of the set-up that has taken place before the start of this book. The author does a good job of referencing the past events in a way that makes it easy to from a picture of all that happened though, so that helped. I never really felt Adalyn’s love for her late husband, it was very factual she mourned him and now she’s done with it. He seemed like a good guy for her form everything we do hear about him from her and other characters.

Adalyn is set up as this strong female character who doesn’t need help from anyone and can take care of herself. To be honest it felt overdone to me, it was a bit much how she had to mouth off to everyone and show how strong and capable she was time and time again. I did like it when she finally realizes it’s okay to ask for help. And she actually could take care of herself which was nice, although she also got herself into most of the trouble she needed to get out. I just never really warmed up to her. I didn’t really care for her inner monologue and the vibe of her character.

Most of the time this was just one of those books that didn’t quite work for me, nothing really bothered me too much, but lots of small things didn’t quite work for me. And its hard to pinpoint what exactly caused me to not enjoy this one as much as I had hoped. One of the things I can actually pinpoint well is the lack of romance. I went in this one expecting a paranormal reverse harem romance, but I feel like it’s lacking in romance. It has sex, but no romance.

It has a great set-up for the reverse harem relationship, there are multiple men she already knows that seem likely candidates like Maxwell, Tobias and Valen. Then there are the two new bounty hunters in town that she’s attracted to. Which sounded like a great set-up. The problem is that’s mostly what is it. Adalyn has some sex with the two bounty hunters and interacts with the rest, but that’s it. There are no deep feelings or romantic set up or them confiding and growing closer.

It was clear there is mutual attraction and lust with the bounty hunters and they all agree to have fun now and with the clear understanding that this is temporary. Usually in books with this set-up it’s clear they get feelings and then they stay, here that wasn’t the case. I never really felt like any of them wanted to take it beyond that, there were a few hints of mutual respect and how they like one another or might want to get together again after they left, but even so I didn’t really feel that this was the set-up for a romance. Maybe that will happen in book 2, but in this book I didn’t feel the romance. Then the other 3 possible guys all seem promising, but are there only as friends and one of them is basically away for most of the book. And 2 of them don’t really seem to have a romantic interest in her so far. So this book mostly is the set-up for what the relationship will develop into and I don’t really feel a lot of romance yet sadly. I had hoped for more romance and not just some sex.

While the men seemed to fit her well enough I wish we would have gotten to know them better. They all have their species of paranormal type and that mostly seems to define them. There just didn’t seem as much else besides that. While mutual I didn’t fully care for the way Remy and Eaton mostly saw Adalyn as a nice lay and one they might want to get back to in the future for another go. Maxwell was over protective which was annoying, although luckily that got less the further in the book you get. I liked Valen the most so far, but maybe that’s because we see so little of him. He seemed interesting and I am curious about his story and what he is. He seemed to respect Adalyn and like her. And he didn’t focus too much on getting in her pants or protecting her like the others did. Tobias is in this book so little I have no clue what to think of him yet.

I liked the set-up of this town in the wild west with only paranormals. I would’ve liked to see it all get explored a bit more. I grabbed a generic wild west image in my head for the town and that solidly in place simply because there was so little description or anything in the book that my image fit just fine. I would’ve liked to see the setting come more alive and really have that historical aspect of the book feel present. The world building was interesting, but just like with the setting I would’ve liked some more. Only late in the book I realized humans actually know paranormals exist. Besides this town there is very little you see of the world and it’s hard to really get a feel for it.

To summarize: I liked the set-up for this book and the wild west setting was a unique touch. Sadly the story didn’t really grip me and I never fully warmed up for the characters. Which made it hard to really care about the events. It was a nice enough read, but I am sad I didn’t enjoy it more. Adalyn is your typical strong female character who can take care of herself and isn’t afraid to let everyone know so. She also is excited to get back into sleeping with men now that her year of mourning is over and she sets her eyes on two hot bounty hunters. She also has some good friends in town. It had a great set-up for the reverse harem romance, but sadly in this book it’s mostly lust and attraction with the two of the guys while the rest stay in firmly the friends zone. I didn’t really feel the romance, but maybe that won’t develop till the next book. I didn’t really warm up to the guys either, the bounty hunters mostly seemed interested in her physically, Maxwell was over protective and Tobias was away for the whole book. Valen seemed interesting, but there isn’t as much about him and not much in the way of romance with him yet. While the setting and world building seemed interesting, there wasn’t enough of either to fully bring it alive.