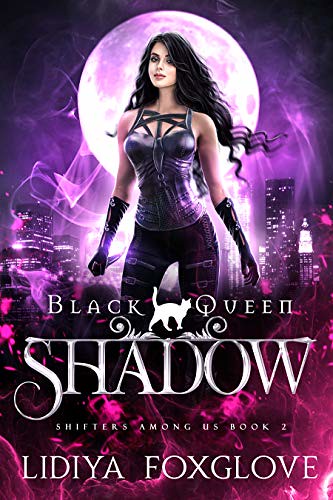 Black Queen: Shadow (Shifters Among Us #2)
by Lidiya Foxglove

Blurb:
This is the fate I must avoid. I refuse to be a pawn.

I’ve been captured by Viktor Castella, the president of shifter territory, held in his mansion with my sexy rival Waylon. According to Viktor, it’s my fate to have three consorts…and Waylon is one of them. Is that why I can’t stop thinking about him? And more than that, it’s my fate to save the world with my power to kill.

They both want me to train while I’m kept safe and secluded, but I’ve always hated feeling trapped–and the only one I want to save is the wolf shifter I love. Ian came home from university to rescue me and now he’s the one who needs rescuing…or so I thought.

I came home to save Frankie. I’d do anything for her. But when I’m captured and sold into the underground wolf fighting scene, I wonder if the best thing I can do for Frankie is to learn how to fight for her…only it turns out that the fighting ring is the least of the dangers we’ll face.

SHADOW is a reverse harem romance, the second book in an epic and steamy series that brings three shifter queens and their consorts together to save their world!

The end of book 1 had some big reveals and twists and I was eager to see how those all played out. This book starts off right after the end of book 2. It was great to see the characters deal with the developments. There is a lot that happens in this book, some good and some bad things. The story can get a bit dark in places and there were some scenes that made me a bit uncomfortable. The author does succeed in showing how bad this world is for shifters and it becomes obvious the queens have a long way to go to resolve this inequality and all the bad things that happen to shifters.

I really liked the character development and seeing the relationships between the various characters develop. There are also more of the consorts we meet and it’s interesting seeing the characters slowly gather closer. I also like to guess which guy will end up with which queen and ofcourse there are some characters we haven’t met yet as well.

This book has some big developments for main character Frankie. One of my favorite parts is her slowly feeling like she has a team beside her that she can trust and rely on. She’s always been alone so that was very powerful to see. I also liked seeing how Mina and Allistair’s relationship developed after the reveals at the end of book 2. Then there is Florian and Ian and how those two stick together. And how some of the other guys form friendships as well. I also liked Frankie’s romance with Waylon and how that progresses. It’s also great to see Frankie slowly changing her stance about the whole queen thing. I also liked how we got a glimpse of the white queen’s power.

It’s great seeing the consorts and queens slowly gather closer and how it’s clear things are in motion as other people are also aware of the prophecy and what the queens and consorts can do. I liked seeing the harems slowly form around the black and white queen and getting a feel for who are consorts and for who. There are some interesting developments in that regard.

There were a few parts that were a bit weird, like how some characters sort of get kidnapped, but not quite. And then how Ian gets forced to fight for sport, but kinda likes it, so it doesn’t quite feel like he’s being forced. It feels like a lot of people want something of these characters and everyone has their own goals and it slowly becomes more clear and makes more sense as the story progresses. It was interesting seeing it all play out and this book kept my attention from start to finish.

I really liked the romance between Waylon and Frankie and so far I like their romance more than between Ian and Frankie. I hope to see more of Ian and Frankie in book 2. I was a bit on the fence about what to think of Allistair and Mina, but I liked seeing how their dynamic shifted in this book and I do feel like he has good intentions. I am still not sure what to think of Viktor as we don’t see as much of him in this book to really get a good feel for him. We also get to see more of Waylon and Ansel and even Florian and Ian. And I feel like I am getting a better feel for for all of their personalities.

To summarize: This was a great sequel and I am excited to see the story develop. There is a lot of character development as well as relationship and romance development in this book. I liked seeing the bonds between characters form and develop. We see the first parts of the black queen and white queen’s harem come together. I liked seeing Frankie grow closer with Waylon and then Ian as well, although I like her romance with Waylon more so far. I especially liked the character development in Frankie in this book, how she slowly learns to rely and trust others and even feel comfortable with them and also her stance on her powers slowly adjusts. There are some dark parts in this book that made me uncomfortable, but it does paint a clear picture of how bad things are for shifters and what these characters fight for. This was a great read and I can’t wait to see where things go in the next book.