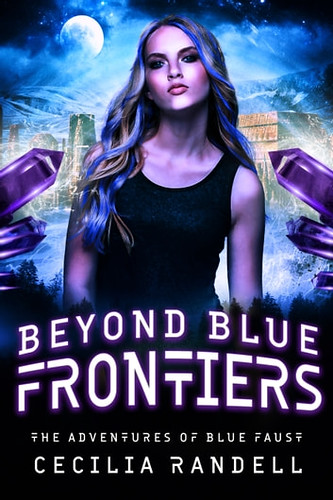 Blurb:
Blue was ready to start her new life, but unfinished business could just be the death of her…

For Blue and Forrest, making it back to Karran was the easy part. They were prepared to learn a new language, new customs and tackle a new kind of relationship.

When Blue’s reunion with Mo’ata is marred by unfinished business, she has a decision to make: proceed with her original plan and attend classes at the Ministry’s Academy, or set herself up as bait for a madman. Phillip is still out there, still using that crystal, still killing.

Throw in cub-babies with razor claws, overprotective clansmen and mercenaries, and long-lost mob families, she’s once again in over her head.

But that’s all part of the adventure, right…?

I was excited to dive into the second book in this series! I really enjoyed the first book and was eager to see them return to Karran in this book. This was a great sequel and I had a great time reading this book.

In Beyond Blue Frontiers Blue and Forrest have decided to create another portal and return to the world of Karran that they accidentally visited in the first book. Now they’re going there intentionally. I liked seeing how Blue had changed a bit since her first visit and her bond with Forrest had deepened. Blue is such a fun character to read about, she seems to normal and realistic and yet she ends up in these anything but normal circumstances. I liked returning to Karran with her and meeting familiar characters again as well as some new ones.

The plot of this one is in a way a direct continuation of book 1. Philip and the crystal are still out there causing trouble and Blue and Forrest join Mo’ata, Levi and Felix on the hunt for them. I thought the plot was on the slow side and not a lot of big things get achieved, I was a bit disappointed they weren’t further along at the end of the book. While reading the slow pace didn’t bother me as much as there was a lot of character interactions and relationship development going on that kept my attention.

I really liked seeing the romances progress and build in this book. Blue and Forrest have grown a lot closer, but there is still a barrier between them as Blue wants to return to Karran first. I liked seeing how they both dealt with being back in Karran and how their romance progressed. They have some struggles, but they all felt realistic and I liked how they communicated well and resolved things. I really like them together.

This book also moves more toward the reverse harem aspect. While Blue is closest with Forrest still, things move along with Mo’ata too and it’s clear she has a bond with several others too, even though it doesn’t really get into romance territory yet. I like how slowly, but surely the romances progress. I have to say I am not a fan of how Mo’ata turned into a typical over-protective guy in this one, trying to determine what Blue could and couldn’t do. I did like that when we get his point of view we see his struggle about how he was raised and what he believes in, but I still didn’t like how he acted most of the time and it slowed down the plot as they had to go over his worries again and again. I am curious about Levi and want to see more of him and Blue, but they don’t speak the same language yet, so that probably will be a while. Felix seems okay enough, but for some reason I just don’t find him as interesting and there’s the language barrier there too. Trevor is an interesting addition to the group and I am curious to see where things go with him.

To summarize: Beyond Blue Frontiers was a great sequel. I was excited to see them return to Karran and follow them along on their adventures. I liked reading about Blue, she’s so normal and realistic and I like how she handles things. Plot was the pacing felt a bit slow and I had hoped they made more progress when it came to Philip and the crystal. Nevertheless the book kept my attention as there still is a lot going on and I liked seeing the character and relationship developments. I like Blue and Forrest together, they are so great together and I like how they actually communicate. I didn’t like how over protective Mo’ata acts, it makes sense as Blue is in danger, but it was just annoying having to go over the same ground again and again. There are a bunch of guys Blue forms a bond with and the starts of the reverse harem romance is definitely there. I also liked reading about the animal characters, Beast and the two cubs they adopt. I am looking forward to the next book!

4 responses to “Review: Beyond Blue Frontiers by Cecilia Randell”