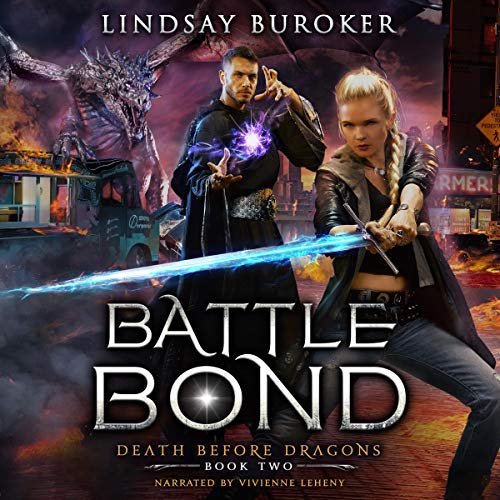 Blurb:
If you think having one dragon around messes up your life, imagine what it’s like when a second one shows up.

He still calls me a mongrel and thinks I’m a criminal, but he healed my wounds after we fought those dark elves together. That’s progress, right? Maybe one day, he’ll deign to use my name.

Not that this is my primary concern. I’m busy with a new assignment. Nin, the awesome lady who makes my magical weapons, has a werewolf problem. Specifically, sleazy loser werewolf competitors who want to drive her out of business. Or worse.

Normally, a couple of werewolves wouldn’t be a big deal, but these ones have powerful allies. And then there’s that new dragon.

It turns out he’s one of Zav’s enemies, and he wants to use me against him.

I don’t know why he’s picking on me — it’s not like I mean something to Zav — but somehow I’ve gotten stuck in the middle of dragon politics. If you think that sounds like a nightmare, you’re right.

If I can’t figure out a way to help my friend with the werewolves while keeping these dragons from tearing me apart, we’re both going to end up flatter than the deck chairs when Zav lands on the roof of my apartment building.

Pick up Battle Bond, and continue the adventure today!

After listening to the first book in this series I knew I wanted to listen to the rest too and I picked up book 2 in audio as well. Battle Bond is a great sequel. There are side plot lines from book 1 that continue here and this book also has it’s own plot that gets resolved in this book. I also liked seeing more of the characters we met in book 1.

In Battle Bond Val has a new problem to deal with, there’s a new dragon on earth whose causing trouble. This dragon is an enemy of Zav and ofcourse Val gets involved in the whole situation. And Val’s friend Nin who makes her weapons has a problem with some competitors sending her threats and trying to get her out of business. These two plot lines both progress throughout the story and get intertwined in an interesting way now and then. Just like in book 1 there’s plenty of action, the pace is well done and I like Lindsay Buroker’s brand of humor.

This was an enjoyable read and I was invested in the story and seeing how Val would solve these problems. I also liked learning more about Val and how she thinks of things. I like seeing her behavior change a bit and how she also tries to help some magical creatures in this book. It was fun to see most of the important side characters from book 1 return and see how they’re doing now.

I didn’t really care for Zav in the first book, but I like how we get to know him a bit more in this book and get a better understanding of him as a person. He also seems to warm up a bit toward Val, which made the interactions and banter between them more fun to read.

The narrator is a great fit for this series and I really enjoyed listening to this book. She handles the different voices well.

To summarize: This was a great sequel! I like how there are some ongoing plot lines throughout the series as well as how each book has it’s own plot that gets resolved by the end of the book. This book has a new dragon whose causing and Val is helping a friend with some pushy competitors who want her out of the magical weapon business. There’s plenty of action, the pace is well done and the there’s humor too. I enjoyed the story and was invested in seeing how things would play out. I liked learning more about Val and seeing how she deals with things. I also liked seeing more of the side characters we got to know in book 1. I warmed up a bit towards Zav now that we learn more about him. The narrator does an awesome job with this series and I think her style fits the series well.