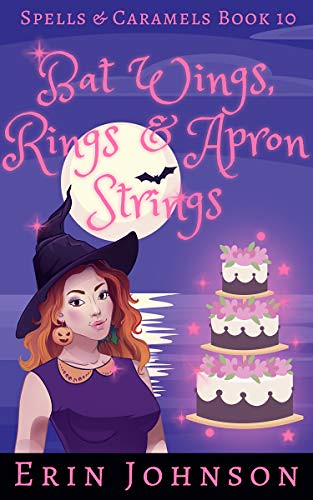 Blurb:
A delicious wedding. A sour and supernatural curse. Will this baker’s next bite be her last?

With her wedding to Hank fast approaching, Imogen Banks has come a long way from the magical contest that brought her to Bijou Mer. But when conspirators seek to sabotage the witch’s big day, she fears her latest recipe for happiness will end in disaster. And after the prince falls horribly ill, Imogen and her friends must solve one more dark mystery before her love and kingdom perish.

Speeding through a menu of suspects as long as the guest list, Imogen clashes with a vengeful monarch and a calculating assassin. But as the minutes tick down to seconds, saving her home and her fiancé may require walking away from everything she loves.

Can Imogen create one final concoction to stop a war and marry her soul mate?

Bat Wings, Rings and Apron Strings is the magical conclusion to the Spells and Caramels cozy witch mystery series. If you like witty characters, mystical intrigue and a dash of romance, then you’ll love Erin Johnson’s tasty whodunit.

After the twist at the end of book 9 I wasn’t sure if I would enjoy book 10. And sadly that worry was partly correct as I didn’t enjoy this book as much as the earlier books and would’ve preferred the series ended with book 9. At the same time it was a great ending to the series and wraps up most of the open questions.

In Bat Wings, Rings & Apron Strings Imogen and her friends are back in the water kingdom and the city Bijou Mer after spending time in Kusuri and planning to make their home there. Now suddenly they are thrown back into the politics of the magical kingdoms. There is chaos due to recent events and their wedding will be this big event now Instead of their small back yard wedding. And to make things even worse Imogen’s fiance prince Hank falls ill on the day of the wedding and Imogen and her friends have one more mystery to solve.

I didn’t really care for the whole being back in the kingdoms plot line, after the last few books I was happy for them to stay in Kusuri. And to me this book felt like a justification of their choice. Hank and Imogen aren’t happy being in spotlight and having all these royal duties, but they also can’t say no. They miss their home in Kusuri. Which made it hard for me to really enjoy the whole being back here plot line. I predicted correctly what would happen at the end, but i did like that turn of events.

Them returning to the kingdoms in this book was a way to resolve some open plot lines and answer some questions and I am happy to see those get resolves, but at the same time there wasn’t as much focus on that either and most it was about the new mystery. And I just didn’t really care about those open plot lines anymore after a few books that didn’t deal with them at all.

The mystery had a short time line, that felt a bit forced, but also added tension to the plot line. They only have hours to solve this one. The way the mystery progressed was pretty straightforward, no multiple suspects or big twists and turns. They rule out some one by one until they find the right one. There are a few interesting twists along the way tough and some great scenes along the way.

I did like how this book gives us the chance to have one more adventure with Imogen and her friends and also catch up with some old friends they haven’t seen for a few books. It was fun to read about these characters and see how some others are doing. I also liked seeing what happened to the kingdoms, but frankly after a few books of hearing nothing about them I just wasn’t as invested. These books are always well written and I like the characters. There were some fun Iggy scenes as well.

The last few chapters were really sweet and I liked the happy ending this book gave the series. I would’ve loved to see an epilogue of their future though to get that last glimpse of how they would make things work. This book also has some great messages of how Imogen finally has found her place and has all these awesome close friends around her. I liked that.

To summarize: While this book didn’t fully work for me it was fun to have one more adventure following Imogen and her friends as they solve one more mystery. Some plot lines that remained open are now resolved and this was a great ending to the series. I just didn’t really care about the few remaining open plot lines anymore after a few books of no attention for it and even in this book the focus is more on the mystery and the wedding. There are a few interesting twists in the mystery, although it didn’t grip me as much. I liked the message of how Imogen found her place to belong and how close she is with her friends and how much she cares about Hank. The ending nicely wraps it all up and all in all this was a great paranormal cozy mystery series.