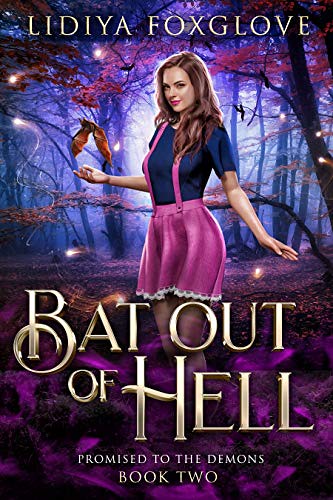 Blurb:
Three wickedly sexy men are in love with me!? How did that happen to a humble baker like me?

I’m still recovering from a sickness, and my beloved Bevan brought me to the faery queen for healing. But the queen herself ordered all three of my suitors to tend to my bedside.

There’s Piers, once a power-hungry warlock, now scarred and fallen from grace, clinging to his pride. He reminds me so much of the warlock I once loved and served that I can’t seem to hate him as much as I should. And Lord Variel is a high demon who did something completely awful to me, but I’m starting to realize that getting angry at him is its own kind of pleasure—and he seems to welcome our sparring. Maybe I just don’t understand demons at all, but his dark fierceness and sculpted muscles are certainly as hard to ignore as ever.

Why is the queen making these devilish men help me?

She wants me to decide how they should be punished before the faery court. I have no idea how to punish someone, but the result will change both men forever.

Then there’s Bevan, the bat shifter I love. Bevan has been stealing bits of Lord Variel’s power for himself. All he wants to do is become strong enough to help familiars gain freedom, but now and then I see a change come over him, and I wonder if Bevan could be the one to end up on the darkest path of all…

I enjoyed the first book in this series and was happy to jump right into book 2 as soon as I receive it. I like this series, the main character is so sweet and likable and she has some great guys around her that are all fighting for the same cause in this book. I liked seeing the harem slowly coming together in this book.

After book 1 I wasn’t quite sure how this would develop into a reverse harem as Jenny seems in love with Bevan and only him and Bevan doesn’t seem fond of the idea either, but in this book it slowly builds onto a reverse harem in a way that made sense. Bevan did seem possessive at first and then suddenly accepting, but I liked it was handled with no drama.

One of my favorite parts was seeing Bevan and Piers grow closer as well as Piers character development. I liked seeing them become friends. I quite like Piers actually, he’s quite the interesting character with a dark past, but trying to be better. I liked how he didn’t chase Jenny at all, he respected her relationship with Bevan and didn’t try to intrude. Which made it all the more awesome when he he got permission to woo her and finally allowed those feelings for her to surface. I liked how he was a bit awkward and so different from the other two.

I wasn’t sure about Variel at the end of book 1 as he did something that really hurt Jenny. I liked that Jenny didn’t forgive him as easily and stayed angry at him for a while, but his attitude sometimes rubbed me wrong. He did change quite a lot in this book and it was nice to see him become more caring, although he’s still my least favorite of the three guys, there are some great scenes with him.

Bevan is just as caring as in book 1, although he has a slightly darker side now that he’s been stealing Variel’s powers, there are some interesting developments there. At times I wasn’t quite sure how this all would play out and I am still not fully sure. I like how relationship with Jenny and how clearly he cares about her.

I liked how this book mostly focused on the relationships between the characters and we see more of Jenny and her personality. And all the baking scenes and reading about the pastries she ate were great. I like how sweet she is and how she sees the best in people. While a lot of the focus was on the characters there’s also the plot line about freeing the familiars, they find some clues and there are some developments regarding that late in the book. The book ends on a bit of a cliffhanger and I am eager to see how book 3 resolves everything and what happens to Jenny/ Celeste and the guys.

To summarize: This was a great sequel. I enjoyed seeing the reverse harem relationship develop slowly in this book. I liked how Piers respected Jenny’s relationship with Bevan. Variel on the other hand I liked less at first with how he kept pushing her, but I warmed up to him as the story continues. Bevan is still very caring, but also has a darker edge now. I liked seeing things develop between the characters and how their relationships progressed and also the character development, seeing Variel change, Piers trying to become a better person, Bevan fighting for the familiars and Jenny finding her own way. There are some interesting plot developments and after the cliffhanger ending I am eager to see what happens in book 3.

2 responses to “Review: Bat Out of Hell by Lidiya Foxglove”