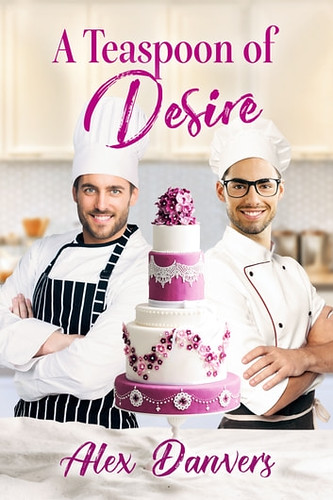 A Teaspoon of Desire
by Alex Danvers

Blurb:
As the competition heats up, these men need a recipe for romance.

Tristan Delgado has talent. How else could he have landed a job working as a pastry chef for one of the most sought-after caterers in Seattle? What he doesn’t have is money. He’s barely making ends meet as it is, and when his sister escapes an abusive husband, he doesn’t hesitate to take her in. Twice the people means twice the mouths to feed, and Tristan is running out of options.

Henry Isaacson is cocky, and he’s okay with that. He has a job he loves, a successful pastry shop, and he’s been chosen to appear on Get Baked, an elite baking competition. This is his chance to prove he’s a cut above the very best and get the recognition he deserves. But his excitement soon deflates like a poorly timed soufflé when he encounters the last person he expects: his old rival, Tristan.

The prize money is just what Tristan needs, but once he realizes he’ll be competing against Henry, everything changes. Henry’s always been smug, annoyingly handsome, and even more annoyingly talented. Tristan can’t afford distractions, but the heat between them is undeniable. Someone will win, and someone will lose, but one thing’s for sure: they’re in for more than a dash of romance.

I received a free copy of this book through Gay Romance Reviews and voluntarily reviewed it.

I started reading this one when I was in the mood for a book about food and that was the perfect moment to start this one. This book is filled with descriptions of food and it has a solid romance to go with it too. Tristan and Henry both are asked to participate in a new American baking competition show. They both work in Seattle and they have a bit of a rivalry going on due to a misunderstanding from when they first met. Slowly they figure out the other isn’t so bad and then fall in love all along while competing in a baking competition that’s very important for both of them and they both want to win.

This was just such a fun read. I loved the combination of the baking show and the romance. I felt that neither element overshadowed the other, both elements are very present. Luckily I enjoyed both elements. I really enjoyed reading about all the baking and the delicious sounding dishes they all made. It sure gave me a craving to try some of the thins they made. The author does a great job describing the competition and the dishes in detail. I was afraid after the first few episodes we would get less details about what they’re baking, but luckily there is still plenty about the later episodes. The author does switch things up so for one baking episode you see more of the prep days while the other is told mostly at the end and for others you see more of the start for example. It made it feel fresh and I thought it stayed engaging and I enjoyed reading about all the food. And ofcourse every time there’s the judging we read about when one person has to leave the show.

Then between and during the baking you have Tristan and Henry who slowly grow closer. I liked both characters and felt they had enough depth to make them feel real. They both had their issues and struggles. And they were both very dedicated to the show and winning. I also appreciated it’s quite light on the drama/ conflict. There is one drama/ conflict point that I saw coming early one and it annoyed me a bit, but I actually liked the way it got resolved and the way both characters proved to the other they were committed to their relationship.

There are some side characters, both Tristan and Henry have some friends or family that play a role in their life. There is a bit of a sub plot about Tristan’s sister that ties in with why he wants to win the show. There are also the other competitors, but they don’t get a lot of depth or page time, but I thought that was fine. The focus really stays on Tristan and Henry and their romance as well as the baking competition. I had expected some topics to get a bit heavier as the book progressed, but it all stayed pretty light. While I liked that I would’ve appreciated a bit more talking and communicating between the guys at times and a bit more delving into some issues.

The rivals to lovers romance worked here for me. I liked how it made sense why they didn’t like the other at first and I liked seeing that change while they’re on the show together. There is mutual attraction from the start, but it slowly turns into more and I could see why they fell for one another.

To summarize: I really had fun reading this one. The combination of the baking competition and romance really worked. Both elements are very present, but don’t overshadow the other one. I enjoyed reading about the baking competition and the descriptions of all the dishes they made. The romance was also well done. They start off as rivals, for a reason that made sense, and then slowly turning into lovers. I liked both characters and they had enough depth to feel real. I liked seeing them together and grow closer. There isn’t a lot of drama and conflict and the book stayed relatively light. I thought at times it could’ve done with a bit more delving into some of their issues and more communicating and sharing. All in all I had a great time reading and am now hungry for all those delicious sounding things they baked! I would recommend this for people who like gay romances as well as books with a heavy focus on food or baking.

2 responses to “Review: A Teaspoon of Desire by Alex Danvers”